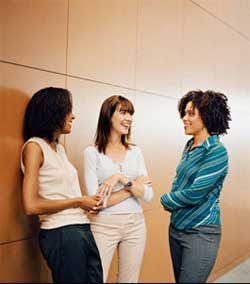 It was an interesting conversation. Lauren, recently divorced, has begun dating again. Lauren has met a man that she really, really likes. This man also really, really likes her. But Lauren has decided that she isn’t going to get too attached. She has dreams and plans that will eventually move her across the country. She isn’t interested in her new relationship deterring her from her aspirations. Lauren says that if it’s meant to be then it will work itself out. A mutual friend of ours shares the same opinion. He feels that if his woman’s goals move her half way around the world then she should go regardless of him and their relationship.
I got the “me, me, me” factor from our conversation. What I failed to see was any “we” factored into their equations.
It was my intentions to head west once my marriage fell apart and my youngest child was out of the home and on his own. I loved the Phoenix, Arizona area and would have moved there without an ounce of hesitation. It also helped that at that time I had a potential job offer that would have made for a much smoother transition. But before I made my decision and went through with it I met my very special friend. A beautiful relationship blossomed. So I made the conscious decision not to leave and readily admitted that he was the one and only thing keeping me here in this state. Lauren thinks it was a foolish decision, that if my very special friend and I were meant to be together then he would have supported my choice to leave.
And I have no doubts that he would have. I know with every ounce of certainty that he would have supported whatever it was I wanted for myself. But why would I have wanted him to? Building a loving, respectful, mutually agreeable relationship requires an investment of time and energy. It also requires a little give and take from both parties. I fully agree that partners should support each other’s goals and aspirations but why would any partner reach for a goal that would exclude their other half, most especially if they are trying to build a life together? Why would I want to build a new life half way around the world without him if being with him was what I wanted most? If we are a couple building a lifetime relationship then shouldn’t decisions be factored around the “we” and not the “me”?
I would still love to move to Arizona. Atlanta is high on my list as well. But I wouldn’t want that without my very special friend wanting it with me, not just for me. The conversation was interesting but I just didn’t get Lauren’s argument about exclusion when inclusion was supposed to be the ultimate goal.
Posted by Deborah Mello at 11:49 AM
Email ThisBlogThis!Share to TwitterShare to FacebookShare to Pinterest
Labels: Love Stories