WHAT DO MEN TELL THEIR DAUGHTERS? 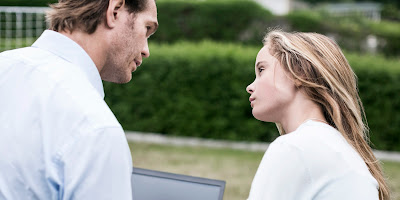 I often wonder what men who assault women tell their daughters. What do they say about their convictions or allegations of improprieties? How do they forewarn them about predators? Do they even caution them against men who prey?
Supreme Court nominee Brett Kavanaugh has been accused of pinning a young woman to a bed, groping her and covering her mouth when she screamed. Allegedly, there was alcohol involved. He was a seventeen-year old student. The girl was fifteen. The GOP would like to brush the allegations aside, seemingly inconvenienced by the timing of the revelation. Many have called her a liar. Some have said they don’t care, party priorities more important than morality. Even their Commander-in-Chief saw fit to castigate the now adult woman’s integrity.
Brett Kavanaugh has two daughters. The very public debate about his alleged actions, about rape culture in America, about the dynamics of women who say no and men who do anyway, has surely invoked questions and conversation in his home. So, what does he say? What will he say when they are older and there is greater understanding?
I have no doubts they’ve been told daddy didn’t do what people have said he did. But what does he tell them about men capable of doing such things? How will he warn them? What will he teach them about protecting themselves from boys who won’t take no for an answer? How will he justify a young man's bad behavior when drunk at a high school party? More importantly, what does he tell them about a girl telling? About women who report the crimes committed against them? Will he prepare them for the shitstorm that follows a female who speaks her truth? Or will all of this continue to perpetuate the cycle of silence that has enveloped women since the beginning of time? Will they grow up to be women shamed into silence and continually haunted by memories of an experience they couldn’t trust anyone to believe?
Men rape women. Men molest girls. Men kill females. Men routinely victimize women. And, NOT all men. There are good, decent men in this world. Men who are protective and caring. But even a few of those men will fall into line to protect their brethren. It’s what they do. It’s what they know. That good-old-boy network has already amassed, collectively ready to defend Brett Kavanaugh, even if they have doubts. Even if they know the truth and the truth may not mesh with their political agenda. Like they did with Donald Trump, and with so many others. They will defend locker room banter and proclaim it okay when boys are just being boys. They will chomp at the bit to call a woman a whore and proclaim her a liar to protect their status quo. Or they will remain silent, voices barely raised to call another man out on his bullshit. They will loudly proclaim a woman the enemy to preserve their boy’s club.
So, how do men explain themselves and their actions? What do they say to justify another man's moral turpitude? What do they say to their mothers? Their wives? What do these men tell their daughters? And just as important, what are they teaching their sons?
Posted by Deborah Mello at 2:34 PM No comments:
Email ThisBlogThis!Share to TwitterShare to FacebookShare to Pinterest
Newer Posts Older Posts Home
Subscribe to: Posts (Atom)