Posted by Deborah Mello at 12:03 AM No comments:
Email ThisBlogThis!Share to TwitterShare to FacebookShare to Pinterest 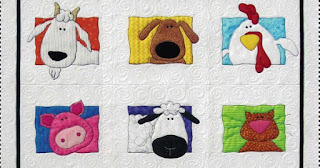 I’ve reviewed some interesting things before. This is the first time I’ve ever reviewed a quilt pattern. I was looking for a unique quilt design for my new grandbaby’s first quilt. I wanted something that represented both her parents. The new mommy and daddy are big animal lovers and since my Son-shine is a good-hearted country boy, farm animals seemed perfect. I discovered a delightful kit by Amy Bradley Designs called Animal Whimsy. The kit included full size patterns, placement sheets, and instructions to make a 42" x 54" wall hanging with twelve animal blocks and a 60-1/2" x 96-1/2" twin size quilt with nine animal blocks and nine pieced shoo-fly blocks. The technique to make the animal blocks was fusible applique which I had never done before but will definitely do again. 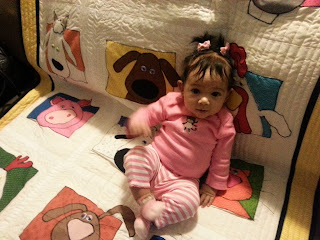 The final product came out better than I’d hoped for and I loved every aspect of the quilting process. Sum total, from start to finish, it took me about two days to complete. I ran into only one hitch and that was when it came to doing the eyes. But I only had a problem because I had not bothered to read the instructions from start to finish. I mistakenly thought I would do the eyes as I finished each block but the eyes were actually the very last thing to be completed. The pattern called for black buttons to be used for the eyes. The staff at Amy Bradley Designs suggested I might want to embroider them on with a satin stitch if the quilt was going to be used to prevent any choking hazards. I opted for these really cute craft eyes knowing that it was meant to be a keepsake and would hang on a wall. 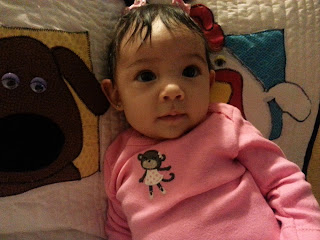 Overall, this pattern was perfect for both semi-novice and experienced quilters. Beginners should at least be knowledgeable with quilting terminology and basic quilting skills. The directions were easy to read and understand and from start to finish this too cute quilt was downright fun. It was the perfect gift for my beautiful grandbaby!


Posted by Deborah Mello at 11:48 PM No comments:
Email ThisBlogThis!Share to TwitterShare to FacebookShare to Pinterest 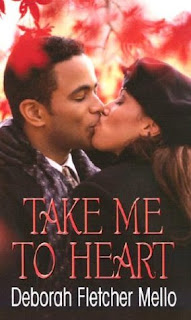 Ten years ago my very first book, Take Me To Heart was published by BET’s Arabesque imprint. It was not one of my favorites.  The heroine, Marguerite, annoyed me, and Dexter, the hero, was just too passive. The story took a different turn when the acquiring editor deleted some eighty pages and worked her editorial magic to make it a romance novel. But die-hard romance fans hated it because it didn’t follow the romance formula and one well-known reviewer commented that I might not want to give up my day job. But for every one who didn’t care for the story there were many others who gave it rave reviews. It was many years later when it hit me that the original story really wasn’t about Marguerite and Dexter, or at least it wasn’t supposed to be. They just got the spot light in the final edition. And that final edition kicked off my career.
Ten years, some twenty-plus books, multiple literary nominations and one or two book awards later and I’m still trying to perfect my craft. With every new book I work hard to make it new and fresh and bring something to the table that sets it apart from others. Sometimes I nail it and other times I give myself an A for effort.
In the last ten years I’ve met some outstanding authors who have inspired and encouraged me. Their nurturing spirits and mentoring have seen me through some tough writing times. In the last ten years I’ve seen my fan base grow and I appreciate all the love and support. People have been kind and encouraging and when I don’t get it right, readers will let me know and I’m grateful for that.
In ten years I’ve seen the publishing game change. I’ve seen some important players come and go. I’ve learned some new tricks and perfected a few old ones. I still haven’t mastered the marketing game that comes with being an author but I’ve gotten better and I’m still learning. But for ten years I’ve gotten to do what I love most and that’s write.
It’s been a good run and I’m proud of my accomplishments. I'm now published by two major publishing houses and also created my own independent imprint. This year I signed two major book deals, one of them for a five-book series. I’m excited to see what the next ten years have to offer. I have more than a few stories to tell and I look forward to being able to do just that.
To family and friends who’ve supported me along this journey, please continue to give me those swift kicks when I need them. To the readers and fans who buy my books and help keep me published, I know that I would not have had ten years of success if it had not been for you. I appreciate and love you all.
Thank you all for ten good years! Thank you very much! Now, let's make the next ten years pale in comparison.
Posted by Deborah Mello at 3:24 AM 2 comments:
Email ThisBlogThis!Share to TwitterShare to FacebookShare to Pinterest
Newer Posts Older Posts Home
Subscribe to: Posts (Atom)