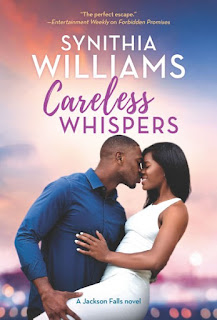 I love a good love story and my sister-author-friend Synithia Williams has done it once again with her newest Jackson Falls novel CARELESS WHISPERS. Anyone familiar with Synithia and Jackson Falls and the Robidoux family have been waiting with bated breath for Elaina Robidoux’s story and Synithia does not disappoint. She brings the sexy, the messy, and the drama to the pages making this a delightful, page turner that you will not want to put down.

I asked Synithia about writing the romances she writes.

“My life is pretty routine. I get up in the morning, get the kids ready for school (virtually currently), work a day job, prepare dinner in the evenings, and spend time with the family before bed. But, right before bed, I get to do something amazing. I sit down in front of my laptop and I get to write sexy, messy, romantic stories. I’m not surrounded by drama, lies, secrets, and glamours settings (my seven tiaras excluded) but I get to let my imagination run wild crafting stories that are full of heart, some humor, lots of drama, and plenty of heat.

“My latest novel, Careless Whispers, is the fourth book in my Jackson Falls Series. A series that was inspired by my love of romance novels. In Careless Whispers Elaina Robidoux is suddenly ousted from her family’s business. A business she sacrificed so much for. To reestablish herself in the business world she has to work with the man who is partially to blame for her firing. Alex Tyson was once the bane of her existence, but as they work together, and Alex not only sees her vulnerable side but cherishes that part of her an unexpected love grows. I love my pretty routine life and wouldn’t voluntarily invite any of the drama I put in my stories into my day to day, but it sure is fun to explore the richness of human emotions and the beauty of falling in love through my writing.”

“This is the family’s room.”

She said the words as if he were a toddler encroaching upon a forbidden space. He supposed Elaina did view him as an unruly child. “That’s what he told me.” He stood and put out the cigar in the crystal ashtray next to the leather sofa.

When he looked back at Elaina, her eyes narrowed. Alex’s stomach did an unwelcome flip. He hated how much he was attracted to her. He’d rather be attracted to a man-eating succubus than Elaina. At least a succubus would take him out with a smile on his face. Elaina was not the type of woman to bring a smile to a man’s face.

She was beautiful. Her thick, wavy dark hair looked so damn soft. God was the only person who knew how many times he’d considered the softness of her hair, her smooth terra-cotta skin, or her full lips, and even then he’d deny it on judgment day. Her chestnut-brown eyes were bright and sparked with intelligence when they weren’t narrowed with skepticism or frozen over with disdain. Then there were her curves. The woman could make men stop in their tracks. He knew because he’d seen it happen. Full breasts, trim waist and rounded hips. He’d wanted to taste her luscious lips the second he’d seen her. Until she’d opened her mouth and told him all the reasons Robidoux Holdings didn’t need him.

He wasn’t sure why Elaina disliked him so much. Despite the rumors that he wanted the CEO position, he didn’t, and had made that very clear to Grant. A part of him was glad she openly despised him. Knowing he had absolutely zero chance with her made ignoring the way his body automatically reacted to her easier.

“There are other places you could have gone. Why did he let you up here?”

Alex wasn’t in the mood to argue. He also avoided being alone with her for too long to prevent any evidence of his crush from showing. If Elaina got a hint that he was attracted to her, she’d have his balls skinned and mounted on her wall like a trophy in no time.

“Ask him, Elaina,” he said in the blasé tone he used with her. “Your father invited me. I decided to come. I won’t be bothering you anymore.” He walked toward the door.

Elaina grunted softly. “I guess today’s the day I run men off.” The words were muttered under her breath.

Alex stopped at the door. Her hand shook as she brought her drink to her lips.

He frowned at the unusual display of a chink in her armor. Her words hadn’t been for him to hear, and he had no reason to find out what was wrong, but the slight slump of her shoulders tugged at an empathetic soft spot he hadn’t realized he possessed. “Are you okay?”

Her head whipped in his direction. Her eyes widened, and her arched brows drew together. “Of course I’m okay. Go down to the party and enjoy the free food.”

The coarseness of her words bristled. His hand tightened on the doorknob. He was ready to leave without another word, until the light glinted off the sheen of tears in her eyes. She looked away quickly and went further into the room.

Unsettled, Alex stared at her profile against the window. Elaina was a force to be reckoned with. If he made any reference to her tears, he might end up with his jugular ripped out. He didn’t have a clue what to say to lift her spirits. The two of them weren’t friends or cordial colleagues. Yet that newly discovered empathy wouldn’t let him leave without saying something.

“You did a great job on the party.”

She frowned at him. “What?”

“The party. I know you did most of the planning. From what I can tell, you did a great job.”

Her chin lifted. “It’s not that hard.”

“Still, I know your dad appreciates it.”

She sipped her drink. “Doubtful.”

“He does. But even if you don’t believe it, then know that I appreciate it.”

“Why would you appreciate it?” she asked suspiciously.

He thought about her earlier comment. “I like free food,” he said with a smile. Her mouth fell open. He’d at least succeeded in surprising her and taking away the sad look in her eyes. Alex hurried out the door before she could think of a snarky reply.

It's only a tease, but you get the idea! CARELESS WHISPERS is available wherever books are sold so go get your copy NOW! And please don't miss the other books in the Jackson Falls series. You'll be disappointed if you do. 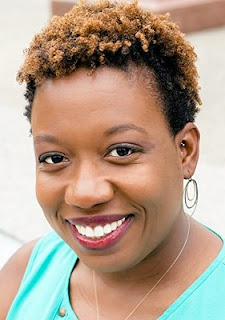 Synithia has loved romance novels since reading her first one at the age of 13. It was only natural she would begin penning her own soon after. It wasn’t until 2010 that she began to actively pursue her dream of becoming a published author. She completed her first novel, You Can’t Plan Love, in the fall of 2010 and sold it to Crimson Romance in 2012.
Her novel Making it Real was a USA Today Happily Ever After blog 2015 Must Read Romance and A Malibu Kind of Romance a 2017 RITA finalist. Synithia has also written two books under the pseudonym Nita Brooks.
When she isn’t writing, she works on water quality issues for local government while balancing the needs of her husband and two sons.

You can discover more about Synithia and her books HERE!