Posted by Deborah Mello at 1:09 PM No comments:
Email ThisBlogThis!Share to TwitterShare to FacebookShare to Pinterest

Posted by Deborah Mello at 12:49 AM No comments:
Email ThisBlogThis!Share to TwitterShare to FacebookShare to Pinterest 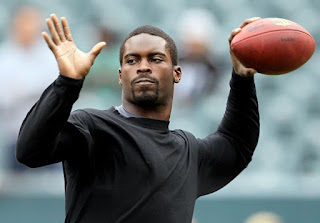 The Greater Raleigh Chamber of Commerce has recently invited Michael Vick to be a guest speaker at their Evening of Champions event. It is a decision that has been met with much controversy and derisiveness.
Michael Vick is an American sports figure, the first African-American to quarterback for the Atlanta Falcons, leading them to the playoffs twice. Despite a stellar career where he set career highs in passing yards, passing percentage, QB rating, passing touchdowns, and rushing touchdowns Vick fell from grace after he was charged with unlawful dog fighting activities.
A search of property owned by Vick uncovered evidence of a dog fighting ring where seventy-plus dogs said to be showing signs of injuries were seized. Gruesome details of abuse, torture and execution of under-performing dogs outraged animal rights activists and put a spotlight on animal abuse and cruelty. Vick received a three-year conviction for federal offense conspiracy charges and was imprisoned. He was suspended by the NFL, ordered to pay the Atlanta Falcons back a portion of his earnings and lost endorsement deals worth millions.
Public outrage was venomous. I myself even posted my disgust for his actions. But as I noted back THEN I was also on the fence, both outraged and hopeful that he would be able to redeem himself. Unfortunately, not everyone has been willing to forgive Vick nor will they consider giving him the benefit of doubt.
There has been a moral majority who have been vicious in their responses to the GRCC’s invitation. Mr. Vick has been called everything but a child of God, the commenters certain that there is nothing he can ever do now, or in the future, other than die, that could redeem him for his crime. And not even then. Somewhere along the way they seem to have forgotten those bible verses that say hate the sin, not the sinner.
I don’t like what Mr. Vick did. His actions were brutal, barbaric, and cruel. But I know others who have done much worse who don’t receive an ounce of the condemnation Mr. Vick is receiving. I’ve witnessed some of the same people who are castigating Vick’s behavior, defending a child murderer, feeling more remorse for those abused animals than a mother's dead baby.
The GRCC posted the following comment about their decision to their Facebook page:
“Our decision was made knowing that some would disagree, but our steering committee felt that his career story offers our guests an informative perspective about the excesses of fame and money in celebrity culture. His presentation includes what he learned from his mistakes and the consequences and how he has worked to change his life. His conviction and subsequent reinstatement to the NFL were one of the biggest stories in sports. We believe he has an important message to share."
I have to agree with the GRCC. I believe Mr. Vick’s experience can be a teachable moment for anyone willing to be open-minded. I admire his comeback story and his willingness to turn his life around, determined to just be a better man. I personally look forward to the opportunity to hear what he has to say.
And for those so anxious to continue to castigate the man for his past, I say clean the rocks from your own house first before throwing stones. It’s hypocritical for PETA and its supporters to champion animal rights and claim to be fighting against all animal suffering, when, for years, they themselves and their co-founder Ingrid Newkirk have been routinely euthanizing animals that would otherwise have been eligible for adoption. And don’t even get me started with their sexist and racist ploys to draw attention to a mission they themselves don’t even follow.
I’m not willing to pass judgment against Michael Vick, or anyone else for that matter. I don’t have a heaven or a hell to put him in when the time comes. Apparently many others seem to think they do.

Posted by Deborah Mello at 7:42 PM No comments:
Email ThisBlogThis!Share to TwitterShare to FacebookShare to Pinterest 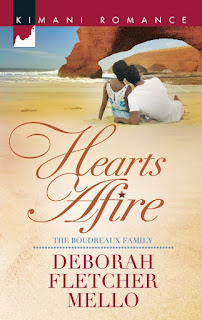 He's raising the stakes—one kiss at a time…

After a nasty divorce, Maitlyn Boudreaux is ready to reclaim her sensuality and rediscover her inner wild child. A luxury cruise to exotic ports of call is just what the New Orleans negotiator needs…and meeting Zak Sayed on board could be an added bonus. The high-stakes poker player wants the same thing she does: a sizzling hot fling with no strings attached.

A brilliant entrepreneur and professional gambler, Zak is one of the world's most sought-after bachelors. But beneath the playboy facade is a guy who's playing for keeps. The passionate eldest daughter of the Boudreaux clan is the soul mate he's been searching for…. Even as a ruthless business adversary threatens to destroy everything Zak cherishes most, can he convince Maitlyn to take the biggest gamble of all?
Posted by Deborah Mello at 12:28 AM 2 comments:
Email ThisBlogThis!Share to TwitterShare to FacebookShare to Pinterest
Newer Posts Older Posts Home
Subscribe to: Posts (Atom)