Posted by Deborah Mello at 3:38 PM No comments:
Email ThisBlogThis!Share to TwitterShare to FacebookShare to Pinterest

Posted by Deborah Mello at 9:22 PM No comments:
Email ThisBlogThis!Share to TwitterShare to FacebookShare to Pinterest

Posted by Deborah Mello at 3:48 PM 2 comments:
Email ThisBlogThis!Share to TwitterShare to FacebookShare to Pinterest 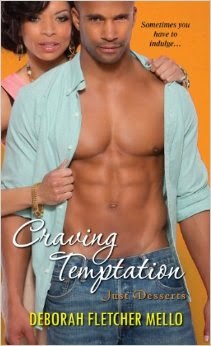 Deborah Fletcher Mello. Kensington/Dafina, $6.99 mass market (320p) ISBN 978-0-7582-9298-8
Mello dishes up rich emotions, memorable characters, and family intrigue set against a background of cultural and political conflict in the second Just Desserts contemporary (after The Sweetest Thing). When attorney Troy Elliot, who’s running for mayor of Memphis, meets the vivacious Amina Salman, his opponent’s campaign manager and daughter, Troy finds his priorities changing. As an accomplished professional, Amina is frustrated by having to balance her conservative Muslim father’s expectations and her own dreams. Amina and Troy creatively plan dates while her brother secretly pursues unsavory business deals. Following their hearts, the lovers marry, setting off a chain of events that tests family loyalty and exposes schemes. Mello handles sensitive religious and cultural issues with grace, and her captivating and heartfelt novel will please new and returning readers with its skillful characterizations, well-paced action, and scintillating love scenes. Agent: Pattie Steele-Perkins, Steele-Perkins Literary Agency. (Aug.)
Posted by Deborah Mello at 12:05 PM 2 comments:
Email ThisBlogThis!Share to TwitterShare to FacebookShare to Pinterest