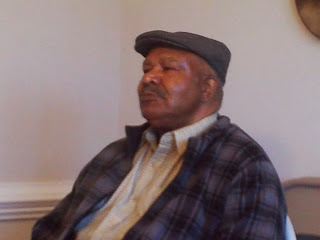 We bring our family home to die. I used to think it was only a Southern thing because it was only in the South where I saw that done.

Today, we will bury a family patriarch. Two weeks ago, we brought him home from the hospital to die. We knew his time was coming to an end. Doctors and nurses had told us so. But we still held out hope that once he was home, under the loving care of family, that his condition would turn around and our beloved Papa Mook would be his cantankerous self again. That he would go back to loving on his “sweet, sweet girls” and finding fault with the sons who never learned how to sharpen a knife properly. God’s plans were not his family’s plans.

Sitting hospice is never an easy thing to do. You worry over the little things. A raspy cough will make your heart race. You worry for their comfort and pain and the things they can no longer convey to you with their words. You count your loved one’s every breath. You sit and you wait for the inevitable and you pray that you are not there alone when they take that last inhale of air. His eldest son and his youngest daughter were with him in the end.

There was an abundance of love that surrounded him. Energy that flooded the space. His family sat vigilant, everyone taking turns to pull their weight to the best of their ability. Laughter would ring from room to room. Sometimes, tears would, too. The princesses would don their masks to go “check” on him throughout the day. One remarked that she liked to sit with him and the angels who had come to visit, too. Their Papa Mook was much loved!

Walter Wesley Woody Sr. was a man of many layers. He was set in his ways and he would not be moved from his convictions. He took pride in his name and what that represented. He was honored that his eldest son and grandson also carried the same moniker. He was a talented musician who could wield his way around a guitar with the best of the best. He was a master carpenter with skills others envied. Sadly, the circumstances of being a black man in the racially-charged South kept him from realizing the full potential of his talents.

He was a man of modest means, but he lived his life abundantly. He had no regrets, owning every aspect of the life he lived. He was an amazing grandfather and great-grandfather. He loved to take the children fishing when he was able. He told them stories with lessons they may not understand until they are adults themselves. He laughed with his grandsons over their girlfriend problems. He whispered secrets they will all hold until the end of time. Our pretty princesses, his sweet sweet girls, were one of his greatest joys.

I was always in awe of how he remembered dates, times, and places with the recall as if he were telling you what he’d had for breakfast that morning. He was a walking history book and what he may have lacked in formal education, he more than made up for with common sense. His impact in the lives of his family will be passed down for generations to come. Not even they realize yet how monumental his experiences will be on their future. He was a giant among men, and he didn’t even know it.