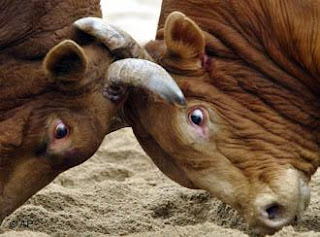 They’re like two bulls in a ring going head to head. It’s a constant back and forth game of one-upmanship against everyone else and each other. I’d had enough when one noted that an uncle’s cousin’s daughter, twice removed, had written a 900-page tome in ten days. Really? When asked if the relative had ever been published there was a list of reasons why the publishers hadn’t gotten it right, the relative’s rejection list substantially long. I suggested that the author might want to give the writing another ten days to try and improve upon what had been deemed perfection. It was suggested back that she might be able to give me some pointers on how to write faster.
The tall tales they spin are blistering. I am equally amazed and appalled that two individuals can lie so easily, neither batting an eye. I've seen them lie about the weather (it rained harder where they were than it did here), what they had for breakfast (if you made pancakes, they ate at IHop), and who they've dated (their significant others always having more money than anyone else you know). Both have this obsessive need to show that they are somehow superior to all others. Being above and better than the rest of us would seem to top their agenda.
I am equally entertained and mortified whenever they're around. Despite my best efforts I don't have the energy to even attempt to keep up with them, but it's been pointed out to me that such is one of my deficiencies because they have both run marathons.
It’s a game of swinging dicks each determined to prove theirs is the biggest. Neither has a clue just how small they both really are, most especially since neither has a dick to swing.
Posted by Deborah Mello at 11:32 PM No comments:
Email ThisBlogThis!Share to TwitterShare to FacebookShare to Pinterest
Newer Posts Older Posts Home
Subscribe to: Posts (Atom)