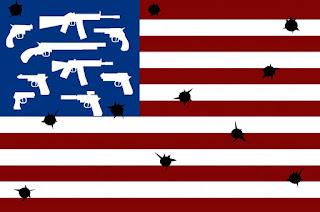 Another senseless tragedy took lives. A man named Stephen Paddock checked into a Las Vegas hotel and from his hotel room, took aim on innocent people attending a concert. At the last reporting, 59 people were killed and more than 500 others were injured. It is being called the deadliest mass shooting in modern American history. But that’s not true. Modern America has a lengthy history of mass killings. Blatant murders that far exceed what recently happened in Las Vegas. Only a select few are acknowledged while others are swept under the carpet as if they never happened.
During the East St. Louis Race Riots of 1917 nearly 700 black women, children and men were beaten, injured or shot to death. 700! White mobs set fire to the homes of black residents who were forced to choose between burning alive in their homes or running out to be met with gunfire. Others were lynched against the backdrop of their burning properties.
In 1919, the Arkansas Massacre claimed the lives of 237 African Americans. 237! The use of racial violence to subjugate blacks was common practice during this time. Lynching was a tool to enforce Jim Crow laws and racial segregation. Victimizing people of color was a tactic used by white men to maintain control over a community.
The Tulsa Massacre of 1921 saw an estimated 300 black people murdered. 300! Black Tulsa was looted and burned by white rioters. The Governor at the time, James Brooks Ayers Robertson declared martial law and National Guard troops were sent in to help, imprisoning all black Tulsans. Over 6,000 black men, women and children were held at the Convention Hall for almost eight days. Over 800 people were treated for injuries and 300 died at the hands of vigilantes with 35 city blocks left in charred ruins.
The Rosewood Massacre of 1923 in rural Levy County, Florida took the lives of some 150 people. 150! For years, authorities tried to hide and conceal the number of black people brutally murdered by a mob of several hundred whites who hunted down the black citizens of Rosewood, a self-sufficient black community, as they burned down every standing structure in the small town.
Mass executions of innocent people didn’t just start because the media suddenly deems it so. The killing of hundreds of people isn’t any less deadly because the victims were predominately black. History doesn’t change because people choose to ignore the truth of our past. The senseless taking of all lives then should have been met with the same indignation as now. But it wasn't. And because it wasn't, what happened in Vegas doesn’t come close to being the deadliest mass shooting of modern American history. It’s just the most recent and what all these senseless tragedies have in common is that the crimes were perpetuated by white men. Maybe, if more Americans had been as outraged back then, much of the violence we see today against any people wouldn’t exist.
My heart goes out to the families who must bury loved ones. I pray for those needing healing. I send light and love to all who have been impacted by this tragedy. As a people, all wanting the same things for our loved ones, we really need to come together and just do better.
Posted by Deborah Mello at 1:33 AM No comments:
Email ThisBlogThis!Share to TwitterShare to FacebookShare to Pinterest
Newer Posts Older Posts Home
Subscribe to: Posts (Atom)