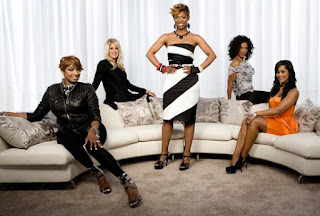 So, I’ve not been getting a good dose of my reality TV meds lately. My favorite guy and I have found The Real Housewives of Atlanta completely lacking. The commercials make for some interesting conversations and after each and every episode we can’t help but ask ourselves “why?”

Why would seemingly intelligent women exploit themselves so wantonly?

In the first season of Housewives of Atlanta I loved NeNe Leakes. I thought she was funny, engaging, and refreshingly honest. This season I’m rethinking my opinion. She is still funny, still engaging, but each of her episodes now seem way too contrived and she comes across as just plain loud and obnoxious.

The new “wife”, Kandi Burruss, won’t last long. She’s not bringing enough drama. She’s raising her daughter, her mother doesn’t like her boyfriend and won’t be moved from that opinion and Kandi seems most real. Plus, she cries. A lot. For me, Kandi just doesn’t have enough spark to hold folks’ attention.

Lisa Wu Harwell got herself some air time this season and she’s working it to her full advantage. The problem I’m having though is she’s working it instead of just letting it happen and happen well. My favorite Lisa episodes though are those with her husband Ed. Ed use to play football. Ed is foine. The man makes for very nice eye-candy when the wives are acting like fools.

And speaking of fools, don’t get me started on Sheree Whitfield. Sheree has abandoned any semblance of decorum and I can’t help but wonder what kind of deal she brokered with Bravo to do so. I am truly hoping they are paying her those six figures she didn’t get in her divorce settlement and that is why she is making such a complete and utter ass out of herself. She is so much better than the “character” she has created for television. I truly hope she will eventually find her way back from the far side.

And last but not least, is hot trailer mess, Kim Zolciak. I’ve got some issues with that cheap trick. I didn’t miss good ole’ girl’s comment last week while prepping for NeNe’s alter ego photo shoot. Initially, NeNe wanted Kim’s alter ego to be a black woman. I didn’t get it but hey. Kim didn’t want to be a black woman. So, NeNe decided she could do this Stepford Wife thing instead. Then that heifer and I don’t use that term lightly, has the audacity to say she didn’t like that either but it would have been “worse” to have been transformed into a black woman. “Worse?” Oh, no she didn’t! Plus, I don’t have any respect for a woman who brags about a married man maintaining her in exchange for sexual favors. They have corners for that kind of thing and Kim would do well to find one and crawl under it. She actually said it would be worse to be a black woman! I wanted to pull her wig off for that one!

Overall, the only folks I’m liking this season are the sixth girlfriend Dwight Eubanks and Kim’s wig-making, high-heel wearing, hand-bag swinging, gay friend. I think those two guys would have a far better show of their own.

Thank goodness Tyra is back with a new season of Top Model!
Posted by Deborah Mello at 1:09 AM
Email ThisBlogThis!Share to TwitterShare to FacebookShare to Pinterest
Labels: Rantings

It's a shame that the ignorance on this show is such a narcotic. I tune in every week and agree with you I love NeNe, but everything she has done this season doesn't make any sense meaning she's inciting drama for the sake of it. Something else I noticed this season is that Bravo is doing a horrible editing job. I haven't seen an episode that has events in sequential order, or without huge gaps in time, so they'll shoot an hour long episode (43 minutes or so) using footage from all over the season. The aftermath of the fight between Sheree and Kim is a perfect example. Last week they shot footage of Kim backing out of her driveway in her white Landcruiser then jumped to a white Escalade drive away from the house. That one definitely left me scratching my head.

Exactly! And maybe it's the bad editing that have these women coming off so badly, although the bad behavior surely isn't helping. I'm glad to know I'm not the only one addicted to their ignorance!