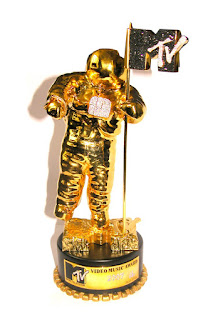 I don't watch music award shows. They typically annoy me. More times than not the acoustics are so bad that they take away from the performances. Then you have idiots who seem to go out of their way to be even more idoitic.

So when I found myself watching the MTV Video Awards with my favorite guy I wasn't expecting but so much. What I wanted most was to see Janet Jackson's tribute performance to her brother Michael. That I enjoyed much. I was also grateful that it came early in the show. I don't think I could have stomached watching all the other dribble to see Janet do her thing.

Then 19-year old Taylor Swift won for best female video. It was her first music award. I'm a big fan of firsts and although I can't profess to be a big fan of her music I applauded her win.

Her big moment however was interrupted by the one and only Kanye West, who in his usual ignorant, obnoxious fashion felt it necessary to steal the spotlight to shout out that Beyonce's video was best. It was the most mean-spirited thing anyone could have ever done.

I don't like Kanye. I'm not even moved by his music because the ugly he projects in everything else he does overshadows what little talent he might possess. For him to interject his personal opinion in someone else's moment when he didn't need to be on stage in the first place was totally uncalled for.

I don't imagine that Kanye's mother raised him to be so disrespectful. I'm sure if she could reach down from heaven and pimp slap him against the back of his exceptionally big head, she would.

And I have no doubts that one day, Kanye will insult the wrong person and someone else would do what his late mother can't. I just hope that when that happens, it hurts. Much. Kanye deserves a good pimp slap and so much more.
After Kanye's hatefest and Lady GaGa (who I really don't get) I was too through. Reruns of the Andy Griffith Show were promising to be far more entertaining. But my favorite guy persisted and despite some horrific musical moments I felt redeemed when Beyonce showed why she is truly the new Queen of the music world. After winning the award for Best Video, Beyonce called Taylor back on stage on told her to take her moment. That and Pink's performance (did you see that girl!) made the whole night worth it.
Posted by Deborah Mello at 9:34 PM
Email ThisBlogThis!Share to TwitterShare to FacebookShare to Pinterest
Labels: Rantings