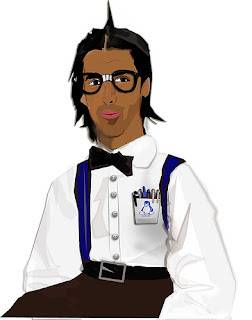 She complains constantly about not having a man. Her relationships last mere minutes before something is either wrong with the man of the moment or something else is just not right about him.
She’ll proclaim a sexual conquest to be “the one” in a heartbeat then conveniently have the relationship end on a sour note the minute that booty call has run its course. Rarely do family and friends have opportunity to meet a new found friend before there is some problem with him. Her men are forever, too controlling, too whiney, too soft, too unpredictable, or just plain too wrong to be right. Never would she imagine that maybe the issues keeping her from a loving, lasting relationship are all her own.
The man who admired her from across the room had a beautiful smile and a gaze that glistened like gold beneath florescent lights. I drew her attention to the stare that was focused so intently on every move she was making and as her gaze met his, he smiled. For his efforts she tossed him a look of annoyance, pursing her lips so tightly together that she looked like she might have swallowed something more bitter than her disposition. With her eyes rolling skyward as she dismissed him with a toss of her head, it was clear that there was something not right with him as well. I questioned what, and then became annoyed at the response.
“He’s too nerdy looking. There’s no attraction. If it’s not there now it never will be.”
I say, never say never. Never is a long time to forever be searching for what might be sitting right under her nose. She’s had no luck with Wall Street Wally or Beefcake Bob. The pretty boys who cling to their good looks and GQ intellect like it’s their ticket through the pearly gates rarely make it through dinner and a movie before falling from grace.
I tried to explain that true love may come in a package not as pretty with dollar store paper and no Hallmark card. She refused to understand that Mr. Right may seem all wrong because she never takes time or energy to know the man beneath the ribbon and bows whose box may be slightly dented. Perhaps, Mr. Right is only wrong because she’s so quick to pass judgment before bothering to even learn a brother’s name.
Posted by Deborah Mello at 12:17 PM
Email ThisBlogThis!Share to TwitterShare to FacebookShare to Pinterest
Labels: Rantings

I know that's right. I wrote about this on my blog too!!

Thanks for stopping by!