KICKING UP MY HEELS 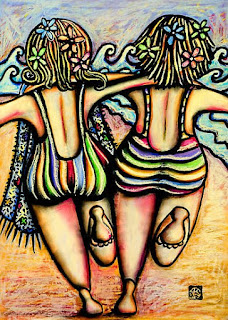 This weekend a man asked me how old I was. I couldn’t help but think back to a time when I would have told him I was “old enough to know better and young enough not to care”. These days my pat response is to smile politely, raise my eyebrows ever so slightly and just not answer at all. And my reality is I’m really not that old but for some strange reason I feel practically ancient.

There’s a part of me that seriously misses that youthful spontaneity when you just didn’t give a rat’s ass. You could kick up your heels, raise a lot of hell, and not feel guilty about doing so. Then life steps in, slaps the crap out of you, and has you asking yourself what in the world were you actually thinking. I’ve witnessed sister-friends, who have reached this place I find myself in, actually attempt to reach back into the annals of their heydays to jumpstart their midlife transitions. Inevitably the results are not pretty, most coming across as frustrated, desperate women trying to be twenty again.

I was reminded of an old English teacher I had in junior high school. Back then the old woman was clearing pushing retirement. Every day she came to school dressed in four-inch love-me pumps, miniskirts that barely skirted the crack of her behind and snow white, Farrah Fawcette hair teased into oblivion. She was quite the character the way she flirted with the male students, batting inch-long, false eyelashes in a scary, come-hither manner. Back then everything about her was just plain weird. Now that I recognize she was just a lonely old woman, the late afternoon of her life line finding her without a companion and fearful of her future, I wish I’d been able to know more about her.

Back then I didn’t see her rat’s ass attitude working for her. Now I’d like to think that maybe not only was it working but that perhaps it was giving her immense joy as well. Sure, she seemed frustrated and desperate trying to be twenty again, but if she didn’t care, then it really shouldn’t have bothered the rest of us.

And I’m surely not interested in love-me pumps or miniskirts. But I’d like to regain my youthful spontaneity and just not give a rat’s ass. I’d like to kick up my heels again, raise some hell, and just not feel guilty about doing so.

I would really like that a lot.
Posted by Deborah Mello at 11:33 AM
Email ThisBlogThis!Share to TwitterShare to FacebookShare to Pinterest
Labels: Me Myself And I

Mrs. M. remained the same odd looking lady for many, many years. The last time I saw her a few years ago, the hair was crazy looking and white. The only thing missing was her youth and her mind. She didn't know who anyone was.

It is important to enjoy life and all that comes with it, before the sand clock runs out.

LOL, Mrs. M. had a pair of boots for each outfit and the jewelry she wore rivaled the boots. She truly enjoyed life and it is amazing the impact she left on her students.