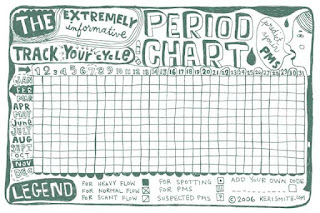 So, I go do that annual checkup thing with the beaverologist and I’d forgotten just how uniquely disturbing it is to bare all your private goodies for the good doctor to play with. Men complain about that one finger and the rubber glove, but that’s nothing like having your feet strapped in stirrups while cold gel and metal is being heaved up your nether-lands and a man is asking how book sales are going. And I won’t even begin to express an opinion about the bubbly med student oohing and aahing over his shoulder like she’d never seen such a sight before, most especially since she has her own and had been oogling other people’s who-who’s all day long.
Like most women I have my fair share of gynocologist horror stories. Thankfully they've been few and far between. One of my most memorable moments was some fifteen-odd years ago when I was being treated for a pre-cancerous cervical condition. I had to undergo an in-office procedure where they took off the top layer of diseased cells. The doctor was using a new piece of equipment. Suddenly he bolts from the room, mind you never saying a word, leaving the door wide open for the whole office to view me in my glory. The next thing I know every doctor in the practice is standing between my legs admiring the view. Seems the doctor was really excited about how well that equipment worked. Had I known we were going to have an audience I would have sold tickets and popcorn.
I've only had one doctor I was prepared to slap and he was only my doctor for that one visit. The man was past retirement, hands shaking, eyes glazed, looking like he was about to drop dead of a heart attack at any moment. I was new to the area and sadly, he'd come highly recommended. I didn't know speculums came in assorted sizes until this doctor. He started the exam with the wrong size and proceeded to test three others before he found one that fit. The moment wasn't pretty and I never went back again. Then I found Dr. Ira.
As beaverologists go, Dr. Ira is a woman's best friend. I swear he doesn’t forget a thing you tell him though I surely wish he would have forgotten one or two facts I’d been ill-advised to share with him over the years. Doc is quite the paternal figure with a keen sense of humor and a wealth of fatherly advice he dispenses along with his usual “lose some weight, chunky butt” spiel. Do you know that man even had the audacity to check obese on that damn checkout sheet they’ll send to my insurance company. And, why does my insurance company need to know that I’m bloated like a beached whale, anyway? Is that pertinent to getting them to pay the bill or what?
Now once I got past the embarrassment of having a relative stranger diddle with my do-goods, the doctor and I had a very nice conversation. And what I walked away with, besides a mammogram appointment to squeeze the girls in a torture device, was that I need to take better care of myself. The doctor reminded me that I deserve some of the attention I’ve been lavishing on everyone else. He reminded me that my health is as important as anyone else’s and this temple we call a body deserves some serious love and attention.
What I also took from the doctor was that my ‘situational’ stress was grossly impacting my physical health. The doctor told me to let my mess go or continue to suffer the consequences. Easier said than done is what I was prepared to say and then the doctor told me to get over myself. “Be well because you want to be,” he said. “Right now you have a choice. Next year you might not be so lucky.” He had a lot of other stuff to say as well and as I nodded and took it all in, I couldn’t help but think that if any doctor had to play with my goodies, I’m surely glad the good Dr. Ira is the one playing with mine.
Posted by Deborah Mello at 7:58 PM
Email ThisBlogThis!Share to TwitterShare to FacebookShare to Pinterest
Labels: Me Myself And I

LMAO! Beaverologist! I am totally stilling that word.


Had I known we were going to have an audience I would have sold tickets and popcorn.
Hehehe.

Umm...that would be stealing actually.