ONLY FOR MY DADDY

Yesterday was Father's Day and I spent the entire day with mine. It was the longest span of time my father and I have spent together, in one room, totally focused on each other since I was a little girl.

When I first started blogging back in 2006 I wrote the following tribute to my daddy, just because. Rather than come up with something new to acknowledge Father's Day it felt appropriate to revisit where I'd gone before. So this is a rerun. My first. And only for my daddy. And just because. 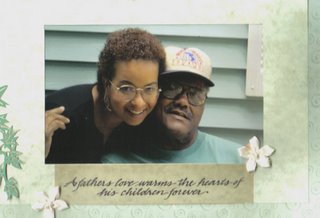 My father was not an easy man. He was demanding, and controlling, and I remember that to a little girl he could be quite mean and scary. But he was very much a hands-on father, dictating every aspect of my childhood. His presence was undeniable and unwavering. Today, I realize that although I am very much a “daddy’s girl”, my father and I are still like oil and water. We’ve been butting heads since the day I was born. Him saying don’t and me doing it anyway was more the norm for us than not. I didn’t have a desperate need to be daddy’s “good” little girl. I believe he actually LIKED me because I wasn’t. I wasn’t afraid to take risks and I believe my father found that to be an admirable trait. We last clashed shortly after my seventeenth birthday, and over the man who would later become my husband. My father had issued an ultimatum, pushing me into a corner. I pushed back and we went almost two years without seeing or speaking one word to each other. During that time I got married and my father was not there to walk me down the aisle. The marriage endured for a good length of time. Thankfully, the silence between my father and I did not.

A few years ago my father suffered a massive stroke. It has left him partially incapacitated but it has surely not stopped him. He insists on doing some things he probably shouldn’t. That insistence can be overly frustrating but I understand and respect it. Although he struggles to be the same man he was before the stroke, he isn’t. But where his body fails him, his determination more than makes up for it. He can still be mean, still be demanding, is still controlling, and sometimes, even a little scary. But he is still my father, being my father, his love undeniable and unwavering. And, he is still one of the few persons who calls me Deborah, absolutely refusing to call me anything else.
Posted by Deborah Mello at 10:12 AM
Email ThisBlogThis!Share to TwitterShare to FacebookShare to Pinterest
Labels: We Are Family