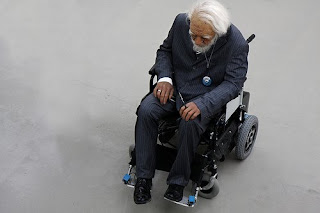 Some eight years ago my grandmother was diagnosed with colon cancer. Subsequent surgeries made for a very lengthy recovery. She spent months in a nursing facility struggling to get back on her feet. Within weeks of her arrival she began to get visits from another patient. “The Mister” would wheel himself into her room every morning shortly after breakfast. He’d pull his wheelchair up beside her bed and there he would sit for the rest of the day. They were a strange pair, this elderly black woman and even older white man. And most interesting about the two of them was that they never spoke one word to each other. Not one single word.

At first we didn’t know what to make of the stranger who had attached himself to the old woman. But he seemed harmless enough and so we did what granny appeared to do. We ignored him. Family would come and go, moving around the room as if “The Mister” wasn’t there. He didn’t seem to mind, nor did he seem interested in connecting with anyone but granny. The two would sit together and watch television, enjoy their afternoon meals together and just before dinner, one of the nurses would come collect “The Mister” and take him back to his own room. The next morning he’d show up like clockwork.

This went on for weeks and then one morning “The Mister” didn’t show. By lunch time my granny became concerned and sent me in search of the old guy. It broke my heart to have to relay the news that the old man had passed away in his sleep the night before. I’ll never forget how she quietly nodded her head, rolled over on her side and spent the entire next week sleeping her time away. She never spoke of the old man again.

Out of the blue, granny wheeled herself to the door of her hospital room and peered down the hall. I watched her for a few minutes eagerly searching for something and so I asked what it was she was looking for.

“The Mister. He’s rolling down the hall. I thought he might stop by.”

“Mama, the Mister was back at the other hospital. He’s not with us anymore. Remember?”

Then she gave me that look she gives me when I apparently don’t know what I’m talking about and she said, “He might not be here with you anymore, but “The Mister” is always here with me.”

Then she wheeled herself out of the room, headed toward the recreation room and “The Mister” who was waiting for her to arrive.

And so I wrote a love story.
Posted by Deborah Mello at 1:09 AM
Email ThisBlogThis!Share to TwitterShare to FacebookShare to Pinterest
Labels: We Are Family