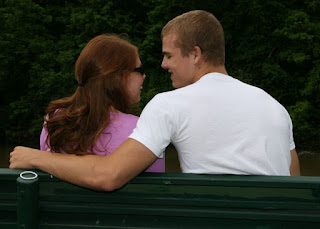 We were having this conversation about dating. A group of friends gathered to give us newbies to the game some sage wisdom about dating while middle aged. My buddy John claims to be “dating” a nice young woman who works where he works. Now, I may have been out of circulation for a good long while, but his definition of what constituted dating didn’t mesh with what I’d known dating to be at all.

John seems to have a fairly comfortable routine with his friend. I’d bet dollar to a dime the friend isn’t as comfortable as John would like to think she is. They spend time together in the office amidst clients and other co-workers. Conversations are typically comfortable and casual, never crossing the lines to anything personal while they are on the clock. Perhaps once every other week or so John might stop by the friend’s home to sit and chat on her living room sofa, never staying longer than an hour and always going home before it gets dark. Sometimes they get together on the weekends for dinner and a movie. Ninety percent of the time the couple is joined by John’s two children from a previous relationship, the teens acting as chaperones for dear old dad. John can count on one hand the number of times the two have been alone together and have fingers left over if he were to count the number of times they’ve made love. But John swears he and she are dating.

I asked him about the courtship. Where was the companionship and the partnership of him and her holding hands, snuggling side by side in front of a television or on a park bench, conversations where they shared dreams and aspirations, laughter and playful banter that couples do as they create a language between them that is all their own? John didn’t have a clue what I was talking about and I wasn’t too keen on John’s definition of dating.

My friend Shelly told the story of her best date ever, she and the man she eventually married meeting on a blind date. A delectable dinner was followed by hours of conversation, the two finding themselves sitting on a bench at the beach when the sun rose the next morning. She and her man have been inseparable ever since.

I’ve had good dates in my lifetime and just as many not so good dates. My absolute best date ever almost never happened, the man of the moment delayed by a business meeting and then caught in bumper to bumper traffic for hours. By the time he arrived neither of us was in the mood for the meal that we’d initially planned for, him frustrated by the delays and me frustrated for having waited. And so he suggested we ride to the airport observation deck to watch the planes take off and land. The moment turned out to be magical. We talked for hours beneath a star-filled sky, the summer weather as picture perfect as one could ask for. He held my hand and held me, the warmth of easy caresses leaving me weak in the knees. It was one of the few times I ever felt like I had a man’s full attention, appreciation gleaning from the light in his eyes. We imagined ourselves jetting of together into the sunset, fantasizing about places we’d love to one day see. And then he kissed me, one of those toe-curling kisses that would have made your clothes fall off if you’d been in a room alone. That man made me feel beautiful and special and I would have given up everything for that night to never have ended. But it did. Unfortunately, I didn’t get the same happy ending that my friend Shelly did.

I may not know much about dating but I can assure my buddy John that it rarely involves other people chaperoning his alone time with his woman. Also, conversation and laughter where a couple creates a language all their own rates high up on that list labeled quality time. Clearly, John needs to think about getting out more. I haven’t had a date in years and I think I could come up with a hundred and one things to do that would make for a better date. Maybe he should start at the airport.
Posted by Deborah Mello at 1:54 PM
Email ThisBlogThis!Share to TwitterShare to FacebookShare to Pinterest
Labels: Love Stories