Today, I'm thrilled to feature friend and fellow author Deatri King-Bey.  I don't often have guest bloggers but when I do, it's because I really want to share something special with you.  When Deatri was six years old, her mother was told that because of Deatri’s dyslexia, she’d probably never learn how to read. At that time it was recommended Deatri partake in a specialized reading curriculum. Unbeknownst to Deatri’s parents, this additional help their daughter would need was actually Deatri being taken out of reading class to sit in the hallway with a tape recorder for a teacher. When Deatri entered the fourth grade at a different school, her parents were terrified to learn their daughter couldn’t read. For years she’d been reciting the bedtime stories to her mother from memory instead of actually reading the written words from the pages.
But times soon changed. In 1999, Deatri was a technical writer at a telecommunications company with dreams of joining the publishing world as a content editor and author. Mind made up, she returned to school and soon started as an editorial intern at Third World Press, Inc., one of the oldest independent, African-American owned publishing houses in the world. Shortly thereafter, her skills were recognized, and she became a more permanent fixture at Third World Press, Inc. Though Deatri believes in Third World Press’s mission, fiction is her true love, so in 2004 she began focusing her editing skills on fiction.
Dozens of manuscripts later, she still hasn’t figured out she wasn’t supposed to learn how to read. February 2006, the second half of Deatri’s dream came true with the release of her debut novel Caught Up. In 2008, Deatri won the coveted Emma Award for Best Steamy Romance of the year with her title Whisper Something Sweet. Currently, she is reading, editing, conducting writing workshops, and writing her next novels.
So, please join me in welcoming Deatri and enjoy the sneak peek
into her writing world!
“Will you marry me?”
Many young ladies dream of the day their hero will bend down on one knee and say those four little words. Of course their hero will be rich, intelligent, tall, dark and handsome and be madly in love with his bride to be.
What’s wrong with wanting a traditional family where the father works outside the home to provide for his family financially and the mother works inside the home to raise the couple’s two point five children? What if the world kept telling you the traditional family you’ve always wanted isn’t for you? 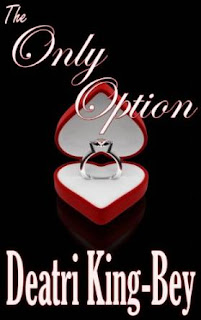 What if an opportunity to have your dream come true made you an offer you’d be insane to accept but every fiber of your being is telling you to accept it? This is where Isis, the heroine in my contemporary romance The Other Option, finds herself.
So what is my latest contemporary romance, The Only Option, about?
Sane upwardly-mobile women don’t agree to enter into arranged marriages… Or do they?
Control freak Jonah Tazi comes from a long line of arranged marriages, but the thought of his parents picking his bride never sat well with him. Time is working against Jonah, so he reluctantly agrees to allow his father to find him a proper bride. Then he meets Isis and becomes infatuated with the vibrant, funny, and talented woman. A powerful man used to getting exactly what he wants, exactly when he wants it, he is unprepared when Isis doesn’t agree to his proposal immediately. Now he is determined to convince her (and everyone else) that he and Isis belong together. Jonah intends to be her only option.
Isis Michaels has always been sheltered by her father. The tables have turned, and now she must shelter him. Isis rearranges her life and will do whatever it takes to please her father during the time he has left—almost anything. It becomes clear that he wants to see her settled before he passes. Is marrying Jonah, a man she’s emotionally and physically attracted to but just met, her only option?
Here’s a little a sneak preview:
Chapter One
“Dad, you’re not choosing my wife.” Adjusting his earpiece, Jonah exited the elevator. Fifteen minutes early for an acquisition meeting, he considered himself late.

“You’re a lot closer to forty than thirty. People are starting to talk.”

“I don’t care.” Artwork lined either side of the hallway. The priceless collection had taken Jonah years to build and there were more pieces to acquire.

“Well, I do. Three years. Three years ago you promised to dedicate time to finding a wife.”

“I was just as busy as my father and his father before him. We’ve always had arranged marriages. That didn’t change when my father moved to this country. He did an excellent job of choosing my wife.”

“You’re divorced.” Jonah’s grandfather had moved his wife from Morocco to the United States shortly after their marriage. The majority of the family remained in Morocco and Spain along with many of their traditions. Jonah’s selection of a wife went beyond tradition. As the only son, Jonah believed it was his duty to produce at least one heir to carry on the Tazi name. Time had slipped by too quickly for him to find a wife. A control freak, he hated the idea of his father choosing his wife, but he didn’t see an alternative.

Attracted to the maturity of women his own age, if he waited much longer, the type of woman Jonah wanted wouldn’t be of childbearing age. “Fine, I’ll get married. I take it you have suitable options in mind?”

“Of course I do. I’ll have your assistant set up the meetings.”

“Speaking of meetings, I have one in thirteen minutes. We can talk later.” Jonah disconnected and continued along the hallway. Originally, he’d tried to acquire D. M. Solutions two years ago, but the owner wouldn’t consider his offer.

He rounded the corner, then stopped in his tracks. Few people had access to his private floor, so seeing a woman standing dangerously close to his Auguste Rodin sculpture shocked him. What drew him even more than her presence were her legs. Quite tall himself, he rarely met a woman who reached his shoulders. He’d give his Rembrandt to have her legs wrapped around him as he pushed into her.

Soon he’d be selecting a wife and other women would be off-limits. Currently a free man, Jonah had no intention of allowing the long-legged lovely to pass him by.
End Sample
I hope you give The Only Option a try. It’s available in Print, Kindle, and Nook/ePub (via Barnes & Noble) formats.
I’d love to hear what you think about The Only Option. Find me online at: http://www.DeatriKingBey.com,  https://www.facebook.com/deatri, http://www.Twitter.com/DeatriKingBey
Thank you so much, Deborah, for sharing your followers with me. It’s been fun.

Posted by Deborah Mello at 2:05 AM
Email ThisBlogThis!Share to TwitterShare to FacebookShare to Pinterest

I loved the interview and the excerpt from Deatri's latest novel. I am definitely looking forward to reading it.

Thank you Tiffany and my secret admirer. :-) Have a fantastic rest of the day.