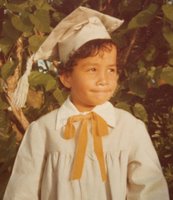 One year ago today we lost our son, Allan Jr. He died from cancer complications. His young life ended abruptly after an unexpected diagnosis of a rare T-cell lymphoma that had spread too quickly through his body. A few short months of chemotherapy treatment served to aggravate his condition rather than help it.

My son knew he was dying. Even while he and his wife were researching treatments and we were all proclaiming that he would beat the cancer and survive, he knew. He knew it before the rest of us could even begin to think about wrapping our minds around the possibility. I didn’t see it back then but I truly believe it today. And I believe that he tried to prepare me so that I could prepare everyone else.

He’d kept a journal right after his diagnosis. A private space for him to share his thoughts and reflect on all he was going through. The last day he was admitted to the hospital he gave me that journal and told me to hold onto it. He said that I would know what to do with it when it was time. I’d attributed his somber mood to his just not feeling well and I dismissed it. I’d even joked about him wanting the book back before I got a chance to get out of the door, afraid that I might peek inside, and I remember the faint smile he gave me back, no hint of humor in his eyes.

His last words to me came out of the blue and they threw me off guard. As I’d leaned to kiss his forehead goodnight, he’d stared straight into my eyes and he asked me point blank, who would raise his children when he was gone. I dismissed that too, my head waving frantically as I told him not to think like that, to be positive. I went home with that book, tucking it away in my desk drawer, determined that I would give it back to him the day we would be taking him home, determined that he would be there to raise his babies when all that bad mess was done.

We never spoke again after that. The next morning they called to say he had to be incubated to help him breathe. Before we made it to the hospital his kidneys had shut down and they were rolling in the dialysis machine. We sat by his bedside for two more days as every major organ in his body suddenly failed him and machine after machine was attached to keep him going. As a family we held out hope for a full recovery even after the doctors had told us for the second time that there was no hope.

Reflecting back on our final days together and all that was spinning around us during that time, I am suddenly struck by events that I can now remember with vivid clarity. They were just vague moments in time while we were going through them. I remember the women who stood in my kitchen and washed my dishes day after day. I remember the friend who swooped in with bags of groceries and trays of food insuring that my full house could easily be fed. I am in awe of my sister-friends who wiped my tears and held my hand and told me that I could do what seemed impossible to even imagine doing.

I remember the soldiers who came one by one to see him, sometimes ten or more at a time. I can suddenly see their faces, the looks of helplessness and despair, love and concern spilling out of their eyes. I remember the army chaplain wiping a tear from my son’s eyes, his faith and spirit lifting up my own. I remember the arms of a stranger who hugged me as I sat alone in the waiting room, needing just a moment to catch my breath and regroup. I remember my granddaughter pronouncing to a neighbor that her daddy was going home to heaven and a room full of grown men falling quiet, not quite sure how to respond. I can see her hand tucked tightly beneath one uncle’s, her arms wrapped tightly around another’s neck. I remember my grandson holding his daddy’s hand as he read to him from a Harry Potter book, the rich tone of his small voice filling the quiet in the room. I remember seeing my husband cry for the very first time.

I can still see the ICU nurse who cried quietly as our family stood over him, each of us wishing a silent prayer skyward just minutes before his life came to an end. And I remember the loving tone of the woman who extolled just minutes after his passing, that we could only imagine what a wondrous moment our son had just experienced, seeing the face of God for the very first time.

I understand now that Allan Jr. had been ready for that moment. His words seemed to say so in that precious journal that I had been entrusted with. He’d written letters to his wife and children inside, loving expressions saying goodbye. And, he’d made peace with God, believing that the Lord had a mission for his life that he was not meant to question. 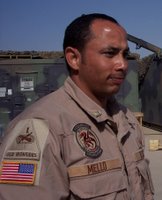 I miss my child. I miss my friend. And when I miss him most, I have only to look in his father’s eyes, hear his brothers laugh, see his children’s faces, to know that his spirit is still with me, still keeping me in check, still inspiring me to be well and do right and stand strong.

I miss you, Allan. I miss you, my favorite son. I will love you always.
In Loving Memory of Allan Miquel Mello, Jr.
November 11, 1969 - November 3, 2005
Posted by Deborah Mello at 10:17 PM
Email ThisBlogThis!Share to TwitterShare to FacebookShare to Pinterest
Labels: We Are Family

What a beautiful tribute. May the Lord continue to wrap his arms around you and your family.

I remember when Allan passed and the beautiful tribute "Deployed to Heaven" that you wrote and shared with your online yahoo group. And I remember thinking I have never read anything so special in my life. But "In Loving Memory", is just to beautiful for words.

Thank you for sharing with us Deb.