PLAYING IN THE SAND 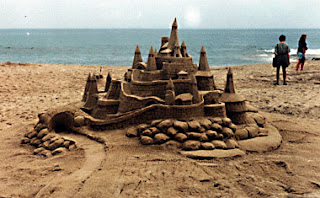 Even as a little girl I didn’t necessarily play nice on the playground. In fact, if I didn’t like the rules I was inclined not to play at all. It was many an afternoon of recess that I was relegated to the sandbox to do my own thing because rarely was I a follower just to say I was a part of something. This bothered other folks more than it ever bothered me. Other folks always seem to have a problem when you’re not doing things their way.

When I was first published I joined a lot of forums and groups to get involved with other writers who were on this same journey. I quickly learned that it was a playground I wasn’t going to be able to play nice on. My first hint came the day I asked one group a simple question, curious to know how something did or didn’t work. These were women with far more experience and I was excited that they would be willing to share the knowledge they’d garnered over the years. Surprisingly not only wasn’t there much sharing but one esteemed author with many publications to her name had the audacity to reprimand me for not having a clue. In fact, she proceeded her rant with “you new authors need to learn…”, then she gave us a mile long list that included rhetoric about not bothering our busy editors. I found her response most curious because not knowing me from Mary, she didn’t have a clue whether or not I had bothered my editor ever. The tone and attitude of her response not only left a bad taste in my mouth but it didn’t inspire me to ever want to play with her at all.

The pieces really came together when I refused to participant in a negative rant about an issue I deemed irrelevant to me and another author gave me a call to “discuss” my non-compliance. It would seem that others felt I wasn’t taking my career seriously enough and that I needed to get with the program. That same afternoon I withdrew from every one of the groups I was participating in, retreating to my own little sandbox to play alone. And I’m glad that I did because my focus turned to my writing rather than my desire to be included where I didn’t feel like I fit.

For whatever reason I decided that with time and my own personal growth I’d give the groups and forums another go. I really was looking forward to connecting with women who were doing what I was doing. But I approached a different group, the dynamics a striking contrast from the other.

Talk about two ends of the spectrum. Like night and day these two groups can’t be more polar. With my new group there is inclusion and answers and a genuine desire to share. I asked a question and actually got a response and a response from an A-list, best-selling novelist who’s success in the industry makes that esteemed author look like she’s the one without the clue. Then I had to wonder, why does the act of sharing clearly work for one group and not the other? Why does one group find success doing what they’re committed to doing and the other fail?

The answer was crystal clear, black and white, no shades of gray to cloud the issues. The first group is too darn busy throwing sand, while the second is focused on building castles.

I think I’ll stay and play. I like building castles.
Posted by Deborah Mello at 4:30 PM
Email ThisBlogThis!Share to TwitterShare to FacebookShare to Pinterest
Labels: Me Myself And I