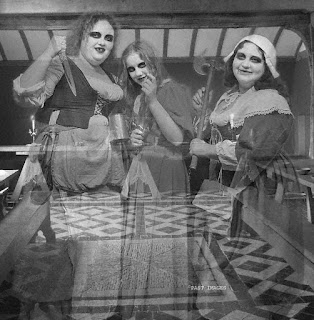 I swear my old people are just having a hard time lately. Mr. Ben isn’t well and now my granny is seeing dead people. Dead people and folks who’ve built a teepee in the corner of her living room and won’t go away. She’s been trying to chase her ghosts away all weekend long. It really isn’t funny but many a relative has gotten a good laugh about it this weekend. Granny’s running around shooing away strangers with a cane and talking to her deceased sisters while the cousins are doubled over hysterical. It doesn’t help that the other senior citizens have been coddling Granny’s hallucinations. One uncle had the audacity to pretend to chase the teepee people out the room. Even Granny looked at him like he’d lost his mind, proclaiming that if you wanted to throw someone out you needed to at least wait until they were there with you. Seems the teepee people were in the kitchen eating collard greens and neck bones at the time.

We have to call her doctor today. Although folks want to believe it’s her medication, I understand that her early stages of dementia have started to accelerate. Accepting that means other folks are going to have to seriously consider moving her to an assisted living facility and no one wants to do that. We may have no choice though because she requires constant care that few of us are able to step up to the plate to give. I worry that while she’s chasing away visions she may fall and break a hip and hurt herself. Certain folks are also scared that if they put her in a home and something happens that she will come back to haunt them. She’s threatened to do such on many occasions. I’m sure she’ll come back to haunt us all anyway whether we do or not. That’s just her style.

Granny has had a good life. She’s well into her late eighties and still as mean as spit. She was never one to bite her tongue about anything and will cuss you out in a heartbeat if you make her mad. In fact I caught hell for leaving the macaroni and canned salmon off her shopping list. She didn’t need macaroni or salmon, having so much in the pantry that she could easily start her own grocery store. But apparently that wasn’t my decision to make especially with teepee people trying to eat her out of house and home.

I tried once to fix her up with Mr. Ben and she wouldn’t have any part of it. “What the hell can I do with a buck that old?” she’d exclaimed, her eyes rolling toward the ceiling. “I ain’t never had no time for no old man,” she’d said. “I don’t want no man over the age of fifty-five! You know once they get old they things don‘t work!” Seems Granny had seen a commercial or two on erectile dysfunction and she wasn’t having any part of it. I imagine that in the moment Granny wouldn’t have been overly sensitive to any man’s personal problem.

Dirty old men, dead people, ghosts, and a woman who doesn’t think that 53 boxes of macaroni in the pantry is enough really gave me a run for my money this weekend. Now I’m broke and tired as hell and the week promises to be just as taxing.
Posted by Deborah Mello at 11:26 AM
Email ThisBlogThis!Share to TwitterShare to FacebookShare to Pinterest
Labels: We Are Family