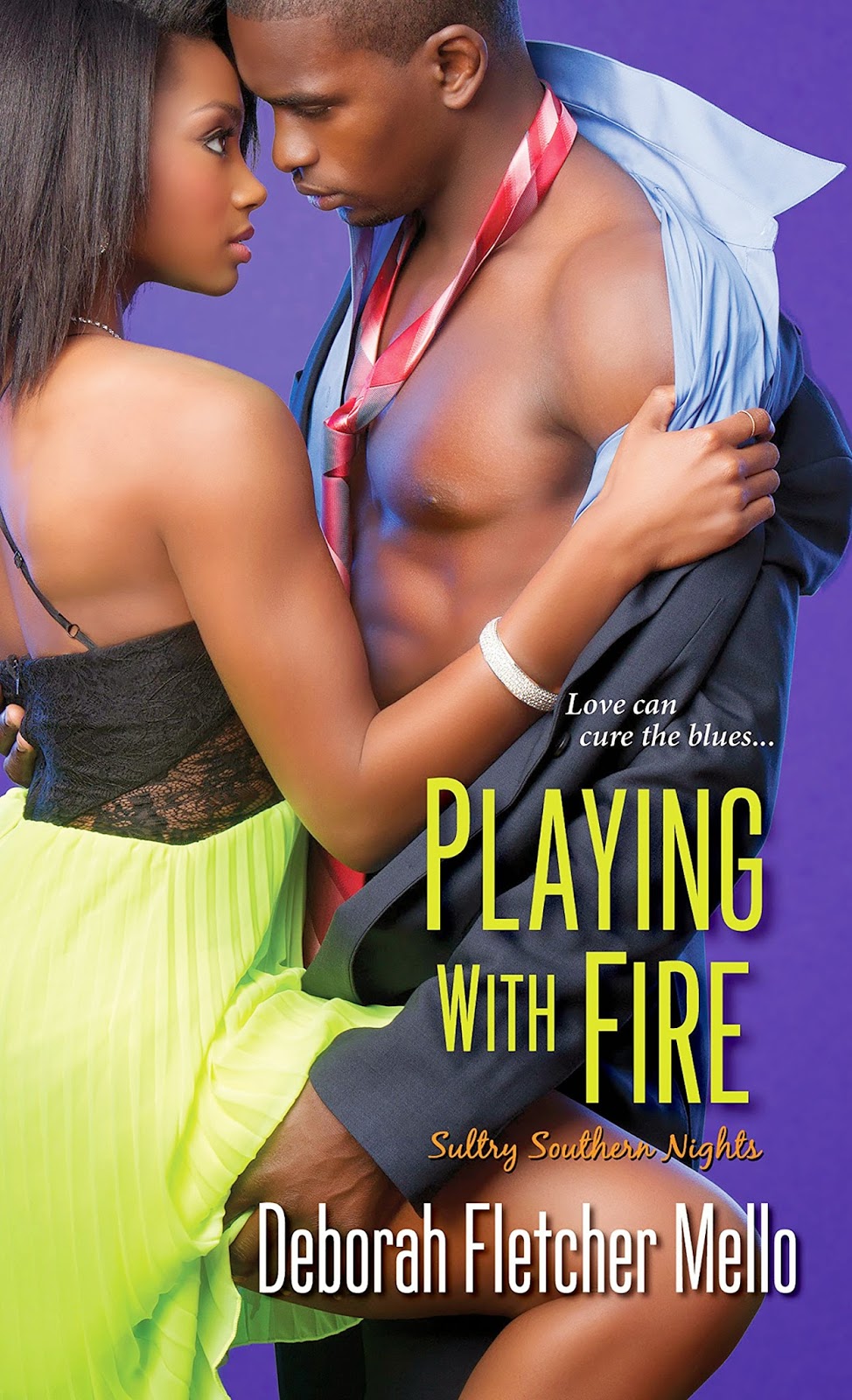 I'm so excited to be a part of the NAUGHTY OR NICE BOOK BLOG TOUR. And it gives me great pleasure to give you the first peek at my next release, PLAYING WITH FIRE. Available from Dafina books on February 24, 2015, wherever books are sold, PLAYING WITH FIRE is the first in my two-book Sultry Southern Nights series. ENJOY this excerpt and please, PRE-ORDER your copy today!

Romeo Marshall is over six feet of cool, smooth, hot, southern seductiveness--just like the music at his popular Raleigh club, The Playground Jazz and Blues Bar. With his beloved mother gone and no father he's ever known, the business is Romeo's everything. It's a place where anything can happen--and the evening one gorgeous young woman and one intriguing old musician walk into the bar--and into Romeo's life--it does. There's something about high-powered, down-to-the earth Taryn Williams that captures Romeo's attention like no other woman has. Yet unanswered questions from his past seem to hold him back from real commitment. For Romeo to move forward in love, he'll have to learn some devastating truths--and James "Piano Man" Burdett is there to teach him. And with Taryn's help, Romeo just may accept that like music, life sometimes needs to be improvised. . .

IS ROMEO MARSHALL NAUGHTY OR NICE?
Thank you to everyone who participated in our book blog tour.

Taryn turned off Duraleigh Road and pulled her Mercedes into the parking lot of the Harris Teeter shopping center. Shutting down the engine, she heaved one last sigh, determined to get her head back on track. She took a quick glance down to her watch. It was late but she hoped they hadn’t yet taken down the salad bar. There wasn’t an ounce of food in her refrigerator at home and she wanted something to eat that didn’t have to do with her ordering at the drive-through window at McDonald’s.

Once inside, Taryn wasn’t surprised to discover she was hours too late. The late night produce clerk, a long, lean drink of chocolate with dreads down to his shoulders, apologized profusely, but he eagerly made suggestions, sharing a host of his quick and easy favorite recipes. His enthusiasm made her smile as he flirted shamelessly.

“I could come cook for you when I get off,” the young man said, his eyes narrowed as he studied her intently. “I’m a great cook.”

Taryn laughed, the gesture easing the stress she’d been feeling. “I appreciate the offer, but I don’t think that’s a good idea.”

She shook her head. “How old are you?”

“Age ain’t nothin’ but a number, beautiful. In fact, I’m writing a book about relationships between older women and younger men. How it’s all about the physical and emotional connection and nothing at all to do with the age difference between them.”

Taryn laughed out loud. “Sounds intriguing, but the answer is still no. Besides,” she said, with a flip of her hand, “I’m not that much older than you are.”

The young man laughed as well, tossing her a quick wink. “Well, if you change your mind you know where to find me,” he said as he proceeded to unpack a box of fresh spinach, loading it onto the cold shelf.

Nodding her appreciation, Taryn headed in the opposite direction and the frozen food section. Clearly, dinner was going to be gourmet microwave in a box. As she stood in front of the freezer door debating between the meat loaf and the chicken tetrazzini, she didn’t see the man who’d turned into the aisle from the other direction. But Romeo Marshall saw her.

Romeo had left the club earlier than normal. It had been a slow night, affording him the opportunity to head home for some much needed sleep. Also in need of a loaf of bread and a bag of potato chips, he had headed to the late night supermarket.

He stood eyeing her rear view. She was dressed in a form-fitting gold-toned silk suit. The designer jacket was fitted, cinching slightly at the waist, and the pants tapered to a flattering length at her ankles. She stood on five-inch, red-bottomed heels. Her hair was pulled up into a loose chignon atop her head, and for the first time he noted the small tattoo that decorated the back of her neck. She suddenly pulled open the freezer door and bent forward, leaning inside as she reached for something on the bottom shelf. Her lush backside reminded him of two nicely sized melons filling her slacks. A smile pulled wide and full across his face.

As she stood back up, reading the back of a food container, he moved to her side, clearing his throat to announce his presence. Taryn jumped, suddenly startled as she turned toward him. As she met his gaze he licked his lips ever so slightly, the gesture salacious and teasing without any effort on his part. She gasped, her eyes widening in surprise.

“Hi,” Taryn answered, her gaze dancing swiftly over the space he filled.

He extended his hand toward her. “Romeo Marshall. I don’t know if you remember me or not, but we met the other night when you were at the club with my friend Roberta.”

She nodded. “Actually, we didn’t meet. Not officially. But I know who you are.”

Romeo nodded slightly as he acknowledged her comment. He took a deep breath, holding it for a brief moment. “You’re right, we weren’t properly introduced, which is why I wanted to say hello and introduce myself,” he said, still waiting for her to shake his hand.

Taryn finally eased her fingers against his, watching as they disappeared beneath his firm touch. A wave of heat suddenly coursed up her spine and she felt the air catch in her chest. “Taryn. Taryn Williams,” she muttered, fighting to catch her breath.

There was an awkward pause as the two stood staring at each other. It was unusually quiet, the store practically empty in the late night hour. The hum of the cooler units behind them was a low, dull drone that seemed to amplify the uncomfortable silence wafting between them.

Taryn took another deep breath, finally speaking first. “Well, I need to be going. It was nice meeting you too, Mr. Marshall.”

Romeo smiled. “I hope we run into each other again. Or maybe you’ll stop by the Playground sometime soon?”

She nodded. “Maybe,” she said, her soft voice an easy lull in the space. “I’m sure I will.”

Romeo nodded. “Good. I look forward to seeing you again. Well, have a good night,” he said as he eased past her and moved down the aisle. He tossed her one last look over his shoulder, his smile still brightening his face.

As he disappeared from sight Taryn released the breath she’d been holding. She leaned back against the freezer doors, her knees suddenly quivering with excitement. She felt like a teenager facing her high school crush for the first time. The sensation surprised and unnerved her. She took a deep breath and then a second to stall the emotion sweeping over her. When her nerves were calmed she headed toward the register.
Posted by Deborah Mello at 12:18 AM
Email ThisBlogThis!Share to TwitterShare to FacebookShare to Pinterest

He's being very nice but wants to be naughty! Lol

Romeo is definitely nice, but I sense an undercurrent of naughty. Will have to read the book to find out for sure :).

He is nice. I can't wait to read it

Romeo is being nice but has that bad boy naughty in him.

Romeo's hello was nice, but I have a feeling he was thinking some naughty thoughts. Whew!

Nice on the way to Naughty!

Nice on the way to Naughty29

Romeo is nice, but has a naughty side he wants to let out.

Rome is nice, but has a naughty side he wants to let out.

He's being nice RIGHT NOW but once he break Tayrn down he's going to show her just how NAUGHTY he is!!!!

Nice, but calculating. He's playing Taryn, and she doesn't even know it.

I can definitely see Romeo as NAUGHTY!

I definitely think Romeo is NAUGHTY

I sense a little naughtiness ...but in a very good sensual way.. He see's what he wants us all....

Definitely naughty, oh the possibilities that exhibits with his swag.

Romeo is Naughty. I think when he gets the opportunity, he's going to show Taryn just how naughty he can be.

Romeo is Naughty. When he gets the opportunity, he's going to show Taryn just how naughty he can be.

Romeo is Naughty.When he gets the opportunity, he's going to show Taryn just how naughty be can be.

Naughty as can be licking his lips

He is starting out nice, but he is a naughty man.

He,s definitely naughty, but naughty is good sometimes right? I think Taryn will have fun with him.

Nice but leaning toward naughty

Nice for the moment..

He was nice but was having naughty thoughts.

He was nice with naughty thoughts

He was nice but had naugthy thoughts

Romeo is nice but can be fantabulously naughty with when need presents.

naughty, naughty, checking out her "rear view". I love naughty with a spice of nice!!