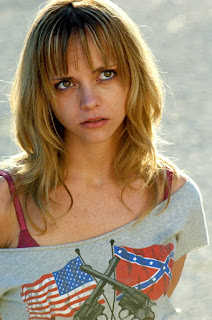 When you make a movie where a black man in Mississippi is chaining a white woman to a radiator and it resonates with your audience, viewers drawn to the characters, you have truly made a movie. I knew I was going to love Black Snake Moan despite it being disguised as a trashy exploitation flick. And I loved every minute of it. Writer/Director Craig Brewer who gave us Hustle and Flow has once again demonstrated the incredible depth of his story-telling abilities.

Black Snake Moan is a tale about damaged people helping and healing each other. The trashy comes from the character of Rae, played by Christina Ricci, being half-naked throughout most of the film. She’s a young woman who pops pills like candy and allows her body to be used as a revolving door for any man with or without a key. She finds salvation when God-fearing bluesman, Lazarus, played by Samuel L. Jackson, finds her beaten and unconscious outside his home and decides that he must take responsibility for her redemption. 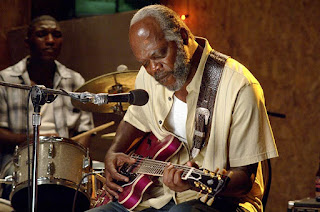 All the characters in this movie are flawed to varying degrees, each battling their own personal demons. Together, they find in each other something each of them has been missing. Brewer has truly crafted a movie that is layered with metaphors beneath a down and dirty Southern Gothic veneer. Black Snake Moan burns red hot with its smoldering depictions of love and lust, vulnerability and immorality. The soulful, down and dirty blues grinding its way through the movie is the icing on a cake that was already rich and sweet.

Sam gave an outstanding, Oscar-worthy performance and I was duly impressed to discover that he learned how to play the guitar specifically for this film. I would like to see though, just once in his theatrical career, a movie where he doesn’t cuss like the sailor he wishes he could be. We already know he can use profanity with the best of them. I’d like to see him not.

One reviewer said that this film is “sex and soul in equal measures; sensationalism and bad taste harnessed for noble purpose.” Not everyone is going to get this movie or like it. The politically correct are already bemoaning the fact that a white woman was exploited and taken advantage of because things like that aren’t supposed to happen to white women. And a black man should surely not be her savior. But fiction being what it is this was one story that could be told just the way Brewer, a white man, wanted it to be told and tell it he did. His white woman finds freedom by letting a black man chain her to his radiator.

I personally can’t wait to see what the man does next.
Posted by Deborah Mello at 7:05 PM
Email ThisBlogThis!Share to TwitterShare to FacebookShare to Pinterest
Labels: Other Folks' Stuff