WHEN ALL ELSE FAILS... 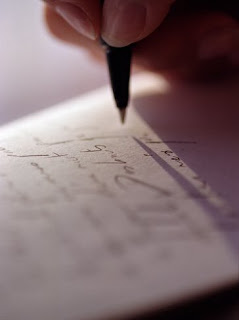 I had an unusually rough week. It was an emotional rollercoaster of highs and lows like I've not experienced in a very long time. I was so moody that I could barely stand to be in the room with myself so I can only imagine what other folks had to be thinking.

Never having been a woman who needed or wanted a lot of attention, I found myself desperate for it this week and there was absolutely none to be found anywhere. I was struggling with some issues and feeling like I had no where to turn because the people I would normally rely on were too busy dealing with their own stuff to be bothered with mine. And so I turned to that one thing that has yet to fail me - my writing.

For as long as I can remember writing has been my greatest comfort. Manipulating phrases and paragraphs and spinning the sliver of a thought into something eloquent and coherent is the most soothing balm I could ever wish for. Words are so powerful, so magnanimous that they energize and empower my spirit like nothing else ever has.

Yesterday was a particularly good writing day. I locked myself away from the world and just allowed my mind to do what it needed to do. It allowed an old story to progress, to build into something more than I had imagined for it and a new story to unfold and take shape. Late in the evening I had to pull myself away to tend to some responsibilites and I did so reluctantly, anxious to get back to my computer and the beauty of my words. I was still writing when the sun came up this morning.

This week will be a better week. I found insight and direction, letting go of every ounce of frustration that had been haunting me. All of my stuff became someone else's story and then I could see it for what it was and more importantly for what it wasn't. Writing has never failed me.
Posted by Deborah Mello at 1:15 PM
Email ThisBlogThis!Share to TwitterShare to FacebookShare to Pinterest
Labels: Writers Corner

I have been in that place before too and I usually find myself reading a book or just going for a walk when I feel like that.

I did a lot of that as well, Tiffany. Hope all's well with you!