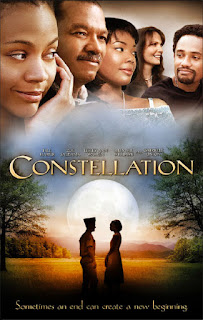 I watch a lot of movies. Some of them are really good. Others are extremely bad. And every so often there is one that moves me so deeply that I can't get it out of my mind. Constellation, written and directed by Jordan Walker-Pearlman is one of those movies. It is just a brilliantly touching work of art.

When the beloved Carmel Boxer (Gabrielle Union) passes away, her entire family returns to Huntsville, Alabama to celebrate her life and legacy. As the Boxer family comes together for the first time in many years, revelations of Carmel’s painful past begin to force each person to address their pent up emotions and true feelings for one another.

The story chronicles the lives and loves of an African-American family in the deep South as they are forced to come to terms with a tumultuous past marked by an unrequited interracial affair. The film explores the way in which the family patriarch, Helms Boxer (Billy Dee Williams), must confront his demons amidst the changing racial fabric of society and his own family. Constellation explores the redemptive power of love and spotlights the importance of honesty and the bonds of family loyalty.

There were some outstanding performances from the ensemble cast that actually brought me to tears. Billy Dee Williams, who I thought was the next best thing to white bread growing up still possesses that quiet, sexy charm that made me fall in lust with him in Lady Sings The Blues. He does the brooding leading man aptly and although I think it's past time he updated that hairdo of his, he's still aging quite nicely. I'd still do him in a heartbeat. It also didn't hurt that they showcase his talent as a visual artist in this film. I'm a sucker for great art and I think Williams' paintings are extraordinary.

The talented Zoe Saldana plays the youngest daughter, Rosa Boxer, and I don't think there's a woman around who hasn't felt the angst Rosa feels as she deals with the death of her beloved aunt, the chasm between her and her father, the pressures of a cracked romantic relationship, and just the infinite struggle of trying to be a woman holding all her stuff together when the walls are falling down around her.

Gabrielle Union as the beloved Carmel delivers some of the most emotionally sustaining lines that have ever been written. For me, there were some classic comments that will forever stay in my head. I particularly loved when she said, "It wasn't love that put any scars on me. Love itself, doesn't do us any damage. Every scar we get, we get from walking away from love. And I guess, whatever you walk away from, you can walk back to. If you got enough heart."

Hill Harper, Leslie Ann Warren, Melissa DeSousa, Rae Dawn Chong, David Clennon, Ever Carradine, and Clarence Williams III round out a cast who conveyed more with facial expression and body language than they did with their script. In fact, it was fascinating to witness so much being conveyed through so little text.

Clarence Williams III is truly a gifted actor whose talent has never been given the accolades the man deserves. In his very brief cameo appearance he left me shaking with anger and rage and crying for the sheer pain you knew he had to be experiencing.

The movie is now out on DVD. If you have an opportunity, please watch it. You won't be disappointed.
Posted by Deborah Mello at 10:33 AM
Email ThisBlogThis!Share to TwitterShare to FacebookShare to Pinterest
Labels: Other Folks' Stuff

I had never heard of this movie before but I am really looking forward to seeing it.

It's a great movie, Tiffany! I've watched it five times and each time I catch something I missed the first time.