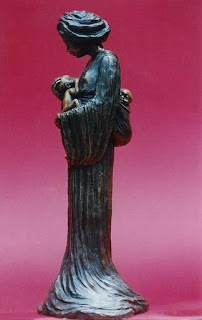 Although there is no denying the paternal presence that hovered over me as I was growing up, I have to acknowledge the gathering of women who helped raise me. I was definitely raised by strong women beginning with my grandmothers. Both were unique, headstrong, fiercely independent women who had a major impact in my young life.

My maternal grandmother, the late Lillie Mae Addison, was a woman I try diligently to emulate. She was a gentle spirit, full of kindness and grace. An exquisitely beautiful woman who raised twelve children and many a grandchild. Late in life she decided she wanted an education and she put many a college professor through their paces to get one. Her family was her stronghold and she sacrificed much in her life to give to them. She lived a long and full life and her influence in mine continues to inspire and move me.

My paternal grandmother, Musethal Fletcher, was a force to be reckoned with. Granny girl could move mountains with one look and she has never been one to bite her tongue about anything. She is well into her late eighties and she’s still here kicking up a fuss about everything and nothing. I am very much my grandmother’s child and we both laugh, not knowing if that is a good thing or not.

My mother, Corrine Fletcher, readily acknowledges that I was a child from hell. I have often said that I would not have wished a child like me on my worst enemy. I admit to challenging the woman in ways that were probably unimaginable to her and not only did she endure but I’m still living to tell the stories. Her two daughters are her pride and joy and we know it. Despite our banging heads more often than not, she’s been my rock through many a storm and I know that where I am today is largely due to her presence and influence.

I also had two godmothers, Mama Sarah and Mrs. Thomas, who regaled me with do’s and don’t do’s growing up. They have been my strongest supporters, each of them encouraging and nurturing me as if I were their own child. It became a ritual for my sisters (biological and best friend) and I growing up to surprise our many mothers with an outrageous Mother’s Day event. These extravaganzas ran the gamut from simple dinners prepared by our own hands to weekend’s away to stay in a five-star hotel. Sometimes I reminisce back on some of the earlier things we did and I just shake my head at our teenage gumption. We became challenged to out do ourselves each year. So much so that after that weekend at the Willard Hotel in Washington we couldn‘t begin to think of what next. Eventually, time, distance, and our respective lives took some of the pressure off with extravaganzas giving way to cards in the mail, casual lunches, an occasional dinner and a requisite gift from Wal-Mart.

Of my “sibling” trio I am the only one who has given birth. I have raised six children, successfully, and I know beyond any doubt that had I not had good examples to emulate, I wouldn’t have been able to do all that I did. My sisters are both educators. They help raise more children than I would ever want to, facing challenges in today’s times that make most of my mishaps seem like child’s play. I do not envy either of them. I do give them much credit for doing what I know I couldn’t. And I appreciate that their abilities, as well, are largely influenced by the Moms who showed us all how.

So to each of you, I say thank you. I love you all dearly. I value and appreciate your wisdom and the life lessons you instilled within me. Happy Mother’s Day to you and to every woman who has cared for and nurtured a child as if he or she were their own.
Posted by Deborah Mello at 1:14 PM
Email ThisBlogThis!Share to TwitterShare to FacebookShare to Pinterest
Labels: Greetings

I hope you have a Happy Mother's Day!!