NOTHING I'D EVER KNOWN BEFORE 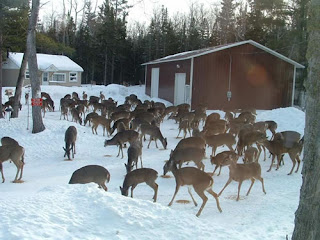 If anyone had ever told me that I could stand in the midst of a herd of deer, some so close to me that I could reach out and pet them, I would not have believed it. But I did just that thing today and the experience was so surreal that I am still in awe of it. I am not normally a naturalist. I love the outdoors in very controlled doses. Wild creatures, dirt, bugs and things that fly about don’t typically give me any warm and fuzzy feelings. But I like looking at most wild animals from safe distances back and I abhor cruelty of any kind if it’s inflicted upon a defenseless creature with wings, fur, or gills.

Today though I met a woman who has taken animal rescue to a whole other level. She lives alone on a two-acre stretch of land. Her back yard has become a sanctuary to some sixty-plus deer of assorted sizes and shapes. She started feeding them back in 1986. Back then there were only three. Their family has grown substantially over the years. They feed twice daily at seven-thirty in the morning and in the evening. I never knew animals had an internal clock but without fail shortly before seven-thirty the deer start gathering in the clearing behind her home to wait for their meal.

They start with corn feed that’s deposited in large metal containers around the yard. They consume some 100 pounds of corn every other day. Then comes some fifty pounds of mineral enriched pet chow. After that they get treats. First, there are three loaves of day old bread that gets tossed across the yard like Frisbees flying through the air. There are three or four does that will actually come right up and eat the bread out of her hands. The males aren’t quite so accommodating. One eight point buck stands with superiority at the edge of the drive waiting for the bread to land at his feet. Once or twice a week they are treated to watermelons, assorted fruits, and cucumbers. I’m told they love themselves some watermelon and cucumbers.

Above your head hummingbirds are flitting from the many feeders that hang off the home’s porch. They consume one and half gallons of sugar water daily. I never knew hummingbirds came in so many extraordinary colors because this was the first time I’d ever seen so many in one place at the same time.

I walked with my new friend today as she fed her deer, listening as she told me the story of how she’d come to do this and all that it involved. Deer walked around us, many skittish by the presence of a stranger, eyes watching my every move. It was eerie to have them inch as close as they came, curious to know if I was friend or foe. They all had names and their keeper told stories of their lineage; who had mothered who, who was mother-less, which were siblings. It was all strangely fascinating and then for a brief moment, just before they began to eat, everything paused. The air was still, quiet dropping around us. I could feel this warming sense of calm wash over me and in that moment I felt as if we were all receiving a blessing of sorts. Then just like that they all began to eat, fussing and playing and wandering that lot of land like nothing at all had just passed between us. The experience was like nothing I’d ever known before.
Posted by Deborah Mello at 10:49 PM
Email ThisBlogThis!Share to TwitterShare to FacebookShare to Pinterest