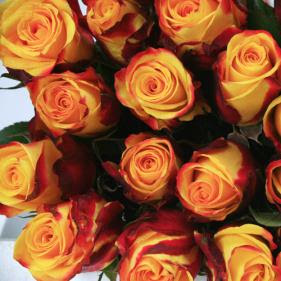 Many, many years ago I worked in an office where one of the secretaries frequently received floral deliveries from her boyfriend/husband. Most of the women always knew that when the flower man showed up with a bouquet in his hands that they were probably for Stella. Most of us also went home after each delivery to complain that Stella was always getting flowers and we weren’t.

One day, the flower man came with friends, delivering the first of what would eventually be some forty dozen roses. Almost five hundred brilliant red roses covered every surface from the reception area to the cafeteria. But these roses weren’t for Stella. They were for Margie. The very last long stemmed rose came with Margie’s boyfriend, a diamond engagement ring tied to the pretty ribbon tied around it. Every woman in the building was in awe of the moment, each of us blown away when her tuxedoed beau got down on his knees to propose.

Then Margie said no. She didn’t say it out loud, not right then, and if you weren’t watching closely you probably wouldn’t even have realized that the poor guy had been rejected, but he was. It soon became clear that Margie wasn’t falling for the roses, no matter how pretty and sweet smelling they were. Later when I asked Margie what was making her so unhappy she told me that she could buy her own roses if she wanted them. It would seem that the two of them had neither the same goals nor were they reading from the same page of life and no amount of flowers was going to change that.

I can count on one hand the number of times a man has ever sent me flowers. I’d also have five fingers left over to count with. There was something about my conversation with Margie that day though that inspired me to buy my own flowers. And I buy them regularly when I need to brighten up my day or to lift my spirits. Yellow roses are my absolute favorite. Hydrangea comes a close second. I bought three bouquets today. Kroger Supermarket had a great special running in their floral department. Having them on my desk had made me feel better about a lot of things going on right now. They’ve lifted my spirits. But even as I sit here and stare at them, I can’t help but wish that at least once in my lifetime, the flower man might show up on my door and the arrangement in his hand will be for me.
Posted by Deborah Mello at 11:45 PM
Email ThisBlogThis!Share to TwitterShare to FacebookShare to Pinterest
Labels: Me Myself And I