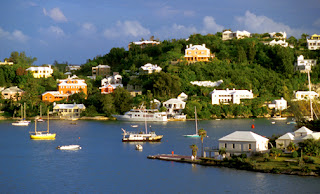 My baby boy has been kanoodling on the island of Bermuda for three weeks now. He went to visit with his older brothers. They're doing some male bonding that he's missed sorely since his older siblings left the family nest. My two older boys are like night and day. One's a rebel to his soul, always testing the limits of every boundary placed before him. The other walks the straight and narrow as if every fiber of his being depended on it. The youngest is a nice balance of them both.

The legal drinking age in Bermuda is 18. Baby boy has been having a grand time in the bars thanks to older brother #1. This has not made me a happy camper. Older brother #2 did, however, make him go to church to confess his sins every Sunday that he's been there. And, I have no doubts there was a lecture or two for the both of them about the errors of their ways.

In either case though my child has been having a grand time splish splashing in clear blue water and playing on the pink sand. So much of a grand time that I've barely heard boo from him since he left. The one time I did call to check that he was well, I was told he really didn't have time for me right then. He was too busy chasing bikinis. (Deep Sigh)
He's off to college next. I truly don't know how much more my poor heart can take. It almost makes me want another one. Then I think about diapers, late night feedings, the terrible two's, parent-teacher conferences, puberty, high school and all that would go with another one and I quickly dismiss that not-so-bright idea. I figure I'd be much better off taking up a new hobby. And then perhaps I might find my own island to go kanoodling on. Now there's a thought....
Posted by Deborah Mello at 9:58 AM
Email ThisBlogThis!Share to TwitterShare to FacebookShare to Pinterest
Labels: We Are Family