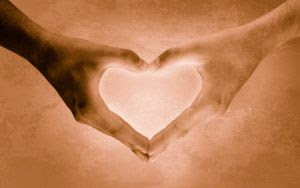 I know a couple that is navigating their way toward what they hope will be a permanent relationship. Both sense that they would be dynamic together and they relish the moment when they can be more public with their affection for each other. They are taking it slow though, both unloading luggage they've collected separately over the years. It's excess baggage that could potentially destroy them before they can even get started on a joint journey if they're not careful to unpack and be rid of its contents. I can appreciate that they are mindful of the fact that entering a new relationship before they've dealt with their respective issues and demons will not serve either of them well.
I've watched them do that courtship dance where they've slowly grown to know and appreciate each other. When the WOW-factor of what could possibly exist between them hit, it hit hard, surprising them both when they least expected it. Now they're anxious to see how far they can take this thing that has grown between them. They're excited to discover whether or not they can be as dynamic as they think they can be. But they don't come into this alone and both are acutely aware that what they do will significantly impact others in their lives as well.
He brings a child from a previous relationship with him and so does she. For those who have merged one family with another, this isn't always an easy feat to accomplish. Intuition tells me that when the true nature of the relationship becomes known, the children will probably be the most supportive and the least surprised. Children know their parents better than their parents know themselves at times. As an outsider looking in, I love the dynamics of what their new family could possibly be. I've watched them engaged together, comfortable with one another. They laugh, joke, talk, and share time easily. When the children are being children with each other, they are inspiriing and it makes one believe that this thing the adults are longing for can exist and be more than even they have yet to realize.
Posted by Deborah Mello at 2:07 PM
Email ThisBlogThis!Share to TwitterShare to FacebookShare to Pinterest
Labels: Love Stories