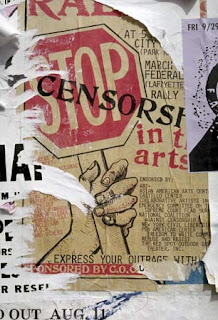 The first amendment to the Constitution of the United States of America, loosely translated, says that the government will not make any laws that will restrain or restrict an individuals right to say or publish what they want to. Have at it, what you spew is on you.

It’s these tenets of free speech that allow any of us to say and/or write what we want without fear of retribution. At least that’s what it’s supposed to do. But clearly, not all speech is free and we’ve seen example after example of that as well. Remember the Dixie Chicks and their comments about Heir Bush?

Don Imus got his head handed to him this past week for exercising his right to free speech. He made a racist joke about the young women on the Rutgers basketball team, calling them “nappy-headed hos”. His comments were just ignorant and totally uncalled for, but the Constitution gives him the right to say whatever he wants to say. It was his arrogance that led him to believe that his doing so would be okay. Imus discovered quite aptly that although government won’t slap his hand for being stupid, the people you done pissed off, their mamas, daddies, and the advertisers paying your bills will surely lose a foot in your ass given the time and the resources.

Don, of course, declared that black folk started this mess with the lyrics to rap music where young black males regularly insult and degrade women with sexist and misogynist comments. Of course, we’ve heard that decried before and from bigger fish than Imus. However, thanks to Don Imus, the criticism actually got loud enough where other folks started to pay more attention. Oprah herself devoted two days of commentary on her show to debate the pros and cons of lyrical content. Russell Simmons and the Hip-Hop Summit held a closed door meeting this week with music’s corporate hierarchy to discuss the subject. Blogs and community websites across the nation have registered their varying opinions as well.

Russell made an interesting comment. He said, “the hip-hop community is a mirror, a reflection of the dirt we overlook—the violence, the misogyny, the sexism. They need to be discussed. All throughout history the poets who have been a reflection of society have always been under fire. We don't like what they have to say, but some of it has to be examined." And now folks are. They’re examining it from every prospective imaginable including, artist creativity, corporate responsibility, and constitutional legality.

Now, this isn’t to say that all of this examination is going to change anything because in my humble opinion, I clearly doubt that it will. And for many, many reasons, I hope that it doesn’t. I don’t like that some folks think they have to turn a buck by demeaning and belittling others but I know that my money doesn’t support them. If yours does, then that’s on you. Bottom line though, if change does happen let it come from the individual who is doing the writing, not legislation or penalization from a power who thinks they know better.

I don’t think however that any one in their right mind is going to tread that tightrope of censorship. Business being what it is, it will always be about the bottom line for the corporate demagogues who put that kind of music out there. So if Billy Bob keeps buying it and it makes the record label money, if it pays June Bugs child support and keeps his mama’s lights turned on, then Bug and crew are going to be rapping about bitches and hos until they’re too old to rap.

But let’s just say something does happen and the powers in charge do effect change, then how soon before they come after other writers and writings? When will the current flood of baby mama drama, Chiquita’s workin’ the streets, Joe Thug doin’ time, ghetto-fabulous literature, get put under the red pen of censorship and publication not be allowed? When they’re done with them, will they move on to erotica and romance? Will the more highbrow literary masterpieces be next on the agenda? And who gets to decide what’s right for me, you and Big Mama to buy and read and what isn’t? When will what I choose to write become fodder for the masses to chew on, criticize, or complain about just because it’s not to one individual’s liking?

As a writer, if my writing is a reflection of the times, who has the right to fire upon me and tell me I can’t hold up a mirror to what I see and feel? If what we see isn’t wrapped in a pretty package with a bow on it, does that automatically make it wrong to say or write about? If it does, I imagine that it being hard out here for a pimp won’t begin to touch how much harder it can actually get for those of us who simply love the written word, our way, no matter what that might entail or who may or may not approve.

As a writer, trying to do what I do is hard enough with my not having to now worry about getting my hand slapped, or worse, to do it. So support a writer or a rapper if you like what they do. Save your money if you don’t. I guarantee that if I can't pay the bills I'll quickly rethink what I put down on paper for publication.
Posted by Deborah Mello at 1:46 PM
Email ThisBlogThis!Share to TwitterShare to FacebookShare to Pinterest
Labels: Rantings