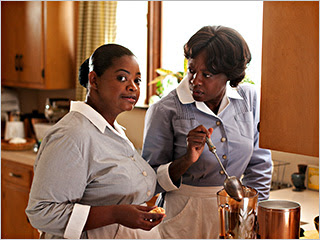 There is no lack of controversy surrounding Kathryn Stockett’s novel The Help and its recent big screen movie release. From being pissed about its historical accuracy, relevance, and context, to the age old argument about whether white authors should or can write black characters, too many have had much to say.

Having read the book, I had some issues regarding her handling of the black vernacular, but they were my issues. As a writer I respect Kathryn’s right to tell her story her way. Had she told it the way others would have liked, it would have been their story, and not hers, and no writer would want that for themselves so why should they expect it from someone else. I say go write your own damn book your way if you didn’t like this one.

Set in the early 1960’s in Jackson, Mississippi, The Help tells the story of African-American maids who care for the children and homes of wealthy white families. Encountering cruelty and racism, Abileen, played by Viola Davis and Minny, played by Octavia Spencer are the two primary maids, while the third protagonist is Emma Stone’s character, Skeeter, a young, white college graduate who enlists their help in writing a book about their experiences.

Seeing the movie, I had different issues. But they are issues I probably would have had with any movie that was over two hours long. Personally, I liked Kathryn’s story despite my issues and I thoroughly enjoyed the movie. As for the controversy, I’m not interested in any intellectual over-analysis of the subject of racism and how it was or should have been handled. For everything believed to be wrong about The Help you can go HERE, or HERE, or HERE.

What I am interested in is all that was right and good about the movie, starting with the Oscar-worthy performances by Viola Davis and Octavia Spencer. This movie truly belonged to both of these incredible actresses who gave gut wrenching performances as women both concealing and ultimately sharing a lifetime of hurt. With so many negative portrayals of black women in the media I loved seeing black women who were nurturing and loving despite the obstacles they were forced to face.

Historically, black mothers sacrificed their own children and families to the benefit of families and individuals who rarely appreciated them. The infamous Cicely Tyson as Constantine demonstrated that no matter the degradation, or betrayal, there was little if any animosity and much, much love in their hearts.

I was entertained, thought the casting was perfect, and just enjoyed the story for what it was worth to me. But then I wasn't expecting Kathryn Stockett to be the end all to every ill between the races, nor did I expect that she could, should or would roll up centuries of what has been done wrong in 566 pages of a paperback or 138 minutes of film.
Posted by Deborah Mello at 2:43 AM
Email ThisBlogThis!Share to TwitterShare to FacebookShare to Pinterest