WALKING THROUGH ILLUSION - A BOOK REVIEW 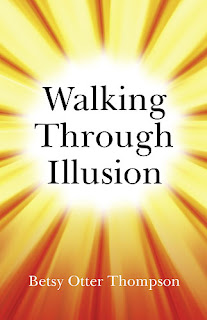 A few months back, inspirational author Betsy Otter Thompson sent me a copy of her book Walking Through Illusion and asked if I would give it a read. On my first attempt I failed miserably. Two pages in I realized that Betsy’s book was clearly going to provoke thought and analysis and I needed to be in a more reflective mindset. Recognizing that I was wanting something that was more mind numbing I had to put it down. I plopped it back on my nightstand atop a large stack of books to be read and I paused until the moment I was ready to take in what Betty was offering.

With the New Year, I was contemplating my future, reflecting on my life’s purpose, and needing something more substantial to sink my teeth into, so I curled up in my favorite reading space with Betsy’s book.

Walking Through Illusion is a series of short stories about biblical people struggling with issues who either knew Jesus or knew of him and were influenced by him in one way or another. . Each chapter is themed and focuses on the growth of a particular person. At the end of each chapter there are questions designed to bring meaningful ideas that were just read into the reader’s everyday life.

Initially, I found the Q & A format where the author has a dialogue with Jesus about each person a little off-putting. I don’t know why I was uncomfortable with it but I was.

Pushing through, I recognized that my discomfort came, not from the author’s format and style, but from the simple ideology that I had lost sight of and was now being challenged with. As Jesus answered her questions, commenting on the purpose of each individual’s trials or temptations, I had to consider the context of such in my own life. It provoked much thought about my faith and those moments when my faith has wavered miserably. And I loved that Walking Through Illusion presented the teachings of Jesus in a very practical, non-religious manner.

This is a book that should be savored. It is rich with texture and one that I know I have to read again for what I might have missed the first time. What I loved most about Betty’s book is that it opened my heart and revived the spiritual journey I have often fallen off of. Walking Through Illusion gave both my mind and soul one serious workout. I look forward to that kind of exercise again.

Betsy Otter Thompson is also the author of The Mirror Theory, the first book in her trilogy on the life of Jesus, and four other books that were published and distributed through her own company, Ascension Publishing. Betsy's work has always gravitated toward the media. A native Philadelphian with a B.F.A. from the University of Pennsylvania, Betsy worked as an account executive for WFIL radio in Philadelphia, and from there went to radio stations WPEN and WFLN. After that, she became a commercial print model and acted in television commercials in New York and Philadelphia. For seventeen years, she worked in Los Angeles at the motion picture and television company Castle Rock Entertainment as the Assistant to the Chairman and CEO. In August '99, she followed her boss to Warner Bros. as he took a new position there as President and COO, and became his Executive Assistant. She is now writing full time. Betsy's writing began unexpectedly while going through an especially difficult time in her life. She believes that her books were the answer to her prayers.
Posted by Deborah Mello at 3:06 PM
Email ThisBlogThis!Share to TwitterShare to FacebookShare to Pinterest
Labels: Other Folks' Stuff