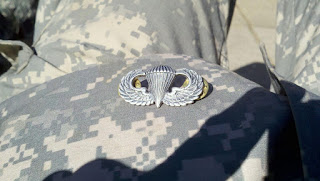 Earlier today my baby boy received his airborne wings. He officially graduated from Army Jump School. It has been a rigourous three weeks of training that I can only begin to imagine. This go-round he was able to call home more and give more details than with army bootcamp.

Although every ounce of it was one big adrenaline rush for him, I know that it was taxing on him both physically and emotionally. Since he started this journey he has had to weather some pretty significant storms.

When baby boy was eight years old he was diagnosed with juvenile rheumatoid arthritis. I am still haunted by the memory of his tears when he was in pain. The first doctor we saw prescribed cortizone injections for his knees. I refused knowing that at the age of eight, taking cortizone shots, he wouldn't have any knees by the time he reached eighteen. We eventually found a great pediatric rheumatologist to control the pain and swelling of his joints that he frequently experienced.

On one particular doctor's visit my son was whining about how much it hurt and he couldn't play some sport he was interested in playing. The doctor leaned in close and essentially told him to "man up". That man told my child that he didn't get to whine and he didn't get to be lazy, that as long as God blew breath into his lungs he would have to learn to push past some kind of pain to live a full and complete life. He told him the true test of his strength would be whether or not he was willing to fight for what he wanted or if he would give up. Son-shine took that as a challenge and has been fighting ever since.

I know that since he joined the military that he has pushed his body beyond the point of no return and he still won't give. I can only imagine the number that jumping from a plane has done to his knees. And why the hell anyone would want to jump from a perfectly good airplane in the first place is beyond me. But Son-shine says it's a requirement for his Special Forces training and so he endures.

Congratulations, PFC. Mello! Your mother loves you very, very much!!!!!

Posted by Deborah Mello at 3:26 PM
Email ThisBlogThis!Share to TwitterShare to FacebookShare to Pinterest
Labels: We Are Family