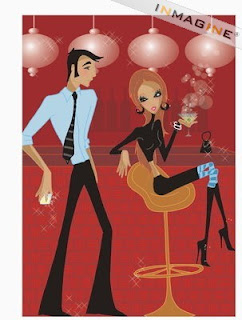 Shannon was on the prowl for some male attention. Girlfriend had donned her slinkiest dress, got her nails done and her hair did and she was rockin’ some serious leg and cleavage. She was determined to get her groove on and have a damn good time doing it. Instead, she was sitting alone at her table, sipping on a champagne cooler bemoaning her woes to me.

Shannon was having prowl anxiety. Guilt was spoiling her good time, big time. Shannon’s body language wasn’t giving off anything that said come hither. Her whole demeanor was screaming serious attitude instead.

Shannon told me she had a man. But her man was busy with other things and other people and always too busy for Shannon. To hear her tell it her man didn’t get up thinking about her in the morning or planning how they might spend their time. Her man thought about her when and if he had a few minutes left in his day and nothing else to do with his time. Shannon estimated that in a seven-day week they spent an average of six hours in each other’s company. Sex happened once, maybe twice, per month if she were lucky. She’d lost count of the number of dinner invitations that had been disregarded, the man not bothering to show up or showing up late, and their telephone calls had become less than amusing.

Shannon didn’t know how other couples did it, having no point of reference and so she asked. Was she wrong to want the guy she wanted to want her back? Seeing the hurt in her eyes I was reminded of my own journey when I thought desperate times called for desperate measures. When being one half of a couple felt worse than being single and alone ever did.

I explained to Shannon that her guilt came from not being honest with herself and her man about her feelings. She was unhappy but she was unwilling to say so. She was also looking for a bandage to ease the hurt of that unhappy. Clearly, boy toy winking his eye at her from across the room might make her forget how bad she was feeling but by the time her night was over, he’d be gone and she’d be right back where she’d started from.

Shannon’s boyfriend had her heart although we could argue whether or not he deserved it. But nothing about him or her was going to get better until she was ready to deal with what was wrong between them. Prowling for attention might have looked like it had its advantages but prowling still had Shannon feeling alone.
Posted by Deborah Mello at 6:52 PM
Email ThisBlogThis!Share to TwitterShare to FacebookShare to Pinterest
Labels: Love Stories