A MONDAY MEMORY - LOVE IN THE LINEUP 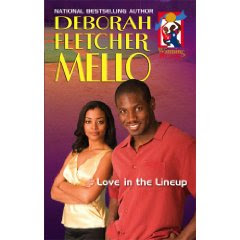 Okay, so you had a little appetizer. Now that you’ve whet your taste buds, let’s see what other senses we might be able to tease. My book, Love in the Lineup, featured wild child Roshawn Bradsher and the ultra-conservative Angel Rios. Angel’s a man who plays games. Roshawn is a woman who’s mastered the art of playing. Together, both prove that there are more ways at winning in life.

Roshawn watched as he slowly sauntered in her direction. He stopped as he reached the edge of the dance floor, his gaze still entwined tightly with hers. He gestured with his forefinger, beckoning her toward him. Theirs was a silent conversation as Roshawn rose from her seat and made a path through the crowded dance floor to meet him halfway, her movements enticingly slow. The moment was surreal as Roshawn focused on nothing but Angel, and the sultry, hedonistic rendition of “Drift Away” billowing through the room.
As she stepped before him, Angel placed his right hand against her hip and slowly eased her against his body. Roshawn closed her eyes and dropped into the sensation as her body pressed hot against the lines of his. His hips were rocking slowly back and forth, and she moved with him, intent on following him wherever it was he planned to lead her. She leaned into him, her arms still hanging loosely at her sides as they navigated an erotic bump and grind to the beat of the music. She dropped her cheek to his broad chest and took a deep breath, inhaling the scent of him. The cologne was a light musk, filling her nostrils and sweeping through her bloodstream like a sensual narcotic. The moment had taken full control of them and when she felt his lips brush ever so slightly across her forehead, The Miracles were whispering what a wonderful world it could be.
Roshawn lifted her gaze up at him, her arms reaching around to rest her hands against the shelf of his rear end. Angel smiled, never missing a step as his large palms wrapped around her back and pulled her tighter against him, his pelvis still rotating in sync with hers. Roshawn gasped as the sensations surging through her body threatened to drop her to the floor, her knees quivering in response. Her eyes fell shut once again as Angel tightened his grip around her torso, melding his body against hers. Angel pressed his cheek to her cheek and when the warmth of his breath blew lightly past her ear, Roshawn was no more good.
He could have lifted her off the floor with one hand, he thought as he held her tightly. She fit so neatly within his arms it was as if they’d been made just for her. As he held her, his body dancing easily against hers, he couldn’t imagine the moment when he would have to let her go. Her body was warm, her skin like satin beneath his palms as he slowly caressed her bare arms, his fingers tiptoeing across her back and shoulders. He savored each sensation, energy surging from one end of his body to the other, converging en masse at the apex of his manhood.
Angel resisted the urge to kiss her mouth, wanting to taste her, knowing that if he did there would be no stopping. He was barely holding on as it was as he stared down at her. Her lips were parted ever so slightly, her breath coming in short gasps, her eyes closed tightly to shut out everything but the emotions surging like fire between them. He was so hungry for her that he felt as if the heat that had risen between them was swallowing his entire being whole.
The song changed, shifting the mood as couples began to bounce around the floor beside them. Angel was still holding on, reluctant to break the bond between them. He felt her sigh, her body quivering ever so gently against him and his gaze met hers one more time. Neither said a word and the moment was interrupted as Nina stepped up to greet them.

Still hungry? Why settle for a just a taste. Click HERE and enjoy!
Posted by Deborah Mello at 10:32 PM
Email ThisBlogThis!Share to TwitterShare to FacebookShare to Pinterest
Labels: Writers Corner