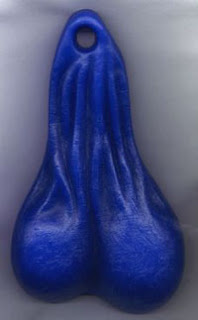 Good old Mr. Ben’s up to no good. Again. Apparently the man’s been out and about visiting places he has no business being. Number one son had an all-points bulletin out after him yesterday, having not a clue where the old geezer had disappeared to. Finally tracked him down visiting the local massage parlor trying to get massaged. Unfortunately, Mr. Ben left home without his wallet and they don’t give you credit at the massage parlor. It seems that the massage parlor ladies know Mr. Ben well so they called for someone to come and get his old butt.

Once he found his way back home I stopped by to visit him, to ask what he’s been up to worrying folks like he’s been doing. The man was tight lipped for a quick minute, and then he let me in on his secret. It seems that Mr. Ben has himself a raging case of blue balls. Now, I can’t attest to that fact personally, but that’s what he told me, and rather matter-of-factly as he took a quick moment to peek over his shoulder to insure Number One Son couldn’t hear him.

Now, it’s sometimes hard to take the stuff Mr. Ben says seriously, but he was quite serious about this condition he seems to think he’s suffering from. Apparently, blue balls is not only uncomfortable, but life threatening. Mr. Ben said so. Which is why he needed them massaged so that the buildup of pressure in his lower extremities doesn’t’ travel to his heart and cause his brain to explode. Then he asked if I would oblige. Apparently you get points toward your heavenly journey when you lend an old guy a helping hand with such a life-threatening problem. After I told him he would have to massage his own balls 'cause I wasn't going anywhere near them, Mr. Ben told me I was going straight to hell, no heavenly journey points for me.

Now, I don’t usually coddle Mr. Ben’s moments of perversion because he really doesn’t know how to let some things go and his obsession with his penis is just such a thing. But I couldn’t resist asking him if his balls were a pale shade of Carolina blue or something more along the lines of a deep, dark military blue. I personally thought this was a valid question. The man looked at me like I’d sprouted two heads and a tail for being so ill informed. Seems his balls aren’t actually blue, just in need of some attention.

Like I told Mr. Ben, what the hell do I know! I don’t have balls and I definitely don’t have blue ones. It appeared to me that this was a personal problem the old geezer was going to have to fix by his lonesome. Seems I was wrong there as well. He asked for a ride over to Ms. Beulah’s house. According to Mr. Ben, Ms. Beulah is a specialist at fixing blue balls and I’ll never be able to look at the deacon’s wife the same ever again.
Posted by Deborah Mello at 12:15 AM
Email ThisBlogThis!Share to TwitterShare to FacebookShare to Pinterest
Labels: Mr. Ben