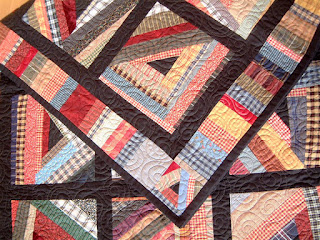 Tina’s grandmother was renowned for her quilt making. During the course of her life she’d made hundreds of quilts, all of them hand stitched. Her grandmother was known to say that she stitched each stitch with love and love would stay long after she was gone. Tina remembers well those summer vacations at her granny’s where the two would sit on her front porch and sew as they shared space and time together. Tina’s favorite memory of that time in her life is when her granny would ask for a story and as they pieced fabric into intricate patterns, Tina would spin a tale, granny interjecting wisdom along the way. Her grandmother had told her that one day she would write a book and Tina believed her granny because her granny had never steered her wrong.

Tina’s grandmother gifted her two quilts, one on her sixteenth birthday and the other on her wedding day. Tina’s wedding quilt was an exquisite vision of white and red and for Tina it represented the wealth of possibilities her marriage held for her. When her grandmother died those cherished quilts became Tina’s lifeline to a past that warmed her spirit and kept her sane.

Tina’s future was a rollercoaster of ups and down. When life became more than she could bear she sought out those quilts for comfort because wrapping herself in them reminded her of her granny and the loving arms that always seemed to keep her hurt at bay.

Weeks ago Tina’s wedding quilt disappeared from its resting place. Tina didn’t miss it at first because she was not the only one who sought sanctuary from its fabric. There had been many a time when Tina had found a family member wrapped in the comfort of one of her quilts because there was something almost magical about them and their memories. Tina could tell you tales of finding her babies snuggled asleep in the folds of her quilts as if they were snuggled tight in the folds of her grandmother’s arms.

Sitting with needle and thread Tina began to meticulously repair the damage, hoping to salvage what was left of her magical quilt and then it hit her that the quilt’s magic had disappeared. Laying the quilt across her hardwood floors she realized that quilt was a metaphor for a relationship that no longer had any value. Tina had spent years trying to repair the tears in her marriage but the fabric of that relationship had continued to unravel and shred. The center of her quilt was completely destroyed, its intricate pattern no longer visible and no amount of stitching or darning was going to piece it back together pretty. Tina understood that the core of her marriage was just as damaged and unsalvageable.

Tina let her quilt go, folding it neatly away before placing it in the trash. Tina let her marriage go as well, her grandmother’s quilt telling her it was time. Now, Tina’s writing a book about her grandmother.
Posted by Deborah Mello at 1:29 PM
Email ThisBlogThis!Share to TwitterShare to FacebookShare to Pinterest
Labels: Love Stories