STEPPING INTO SOME MESS 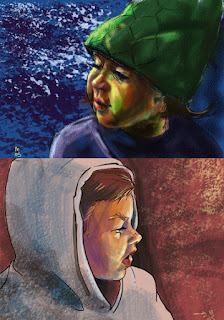 When family steps into some mess they usually know how to step in it good. Jim and Tim were born so close together that most folks assumed they were twins. Few knew that there were actually ten whole months that separated one’s birth from the other.

Tim and Jim had been at odds with each other since the beginning. Tim, the youngest, was the favored child. Parental preference was showered down on him simply because he looked most like his Caucasian father. Older brother Jim was acutely aware that the darker tone of his biracial roots placed him second in their father’s eyes. Daddy found it necessary to remind him every time his younger sibling was allowed to tag along while he was left behind. Where their black mommy was during this time is a whole other story.

By the time Tim and Jim had reached their teens they were waging daily battles to prove their worth with Jim always failing in good old padres color struck eyes. These brothers battled for approval and value, the fallout from the wars they waged tainting everything and everyone around them.

Tim stepped into the mess first. Her name was Daisy, the high school honey he thought would be with him until the end of time. Then Jim stepped into that mess right behind him, swaying old Daisy right out of his brother’s arms. Clearly, Daisy wasn’t your average take-her-home-to-mama material. The judge had declared this when Daisy was proven to have been stepping into mess all around town. Daisy insisted though that Tim was the daddy but these were pre-DNA testing years so no one ever knew for sure.

Fast forward some thirty-odd years and Tim and Jim haven’t spoken since forever. Neither knows the others families, both having missed out on a wealth of history. Harboring bitterness over a past neither could change had stolen time these two brothers should have shared. Neither had ventured to extend an olive branch of forgiveness, both figuring that they would always have time. Sadly though, Jim’s time failed him, the man dropping dead before he and his brother could reconcile.

Mess spreads thick and foul if you don’t clean it off your soul before you move on. Now the aftermath of Tim and Jim’s mess wants to know his daddy. Denial has been the only thing Daisy’s baby boy has ever known and denial continued to be the only thing his alleged father and uncle gave him. Now that DNA may prove Daisy right, it could also prove her wrong, and a young man who never knew his daddy, may no longer have a daddy he can get to know.
Posted by Deborah Mello at 7:48 PM
Email ThisBlogThis!Share to TwitterShare to FacebookShare to Pinterest
Labels: Rantings