GIVING ME A MIGRAINE! 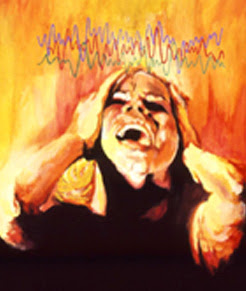 ARRRGH! I swear, this book I’m trying to finish is giving me a major migraine and I've got a proposal I need to be working on. We’ll totally disregard the fact that everything is late and not fashionably late, but more like agent and editor ready to ring my neck late. It’s late because editorial changes on book one dictated a major rewrite. So, not only is it late but the characters are just not gelling. He’s not giving me any warm and fuzzy feelings and she is starting to wreck my nerves. And I can’t begin to tell you why I’m having such a difficult time pulling this one together.

For the first time ever I actually know the story. I know the story like I know my name. I know everything my hero is supposed to do and everything the heroine is supposed to say. They’ve had more conversations together in my head than I care to remember and I still can’t seem to get it to feel on paper the way I need it to feel. And I’ve been having a major migraine trying.

I think part of my problem is that this book is part of a series. I don’t do series well. The one and only series I’ve done thus far came quite by accident. The story had three friends. My readers kept asking about friend’s number two and three. So, they each got a book. Books that stood on their own without each other. That series came together but as I wrote each book I wasn’t aware of it being a series. They were just three free standing books that had a connection of sorts.

This series is situated in a place that connects the characters and subsequently the stories and to write it I am required to continually be aware of that connection. And I’m just not doing that well. I was truly done with the characters with the first book. Resurrecting them for another tale isn’t feeling quite as natural as I would like it to feel which probably accounts for why I can’t get them to feel right on paper.

I’m determined though to be done with this book. Come hell or high water the agent and the editor won’t have to ring my neck after this week is out.
Posted by Deborah Mello at 8:43 PM
Email ThisBlogThis!Share to TwitterShare to FacebookShare to Pinterest
Labels: Writers Corner