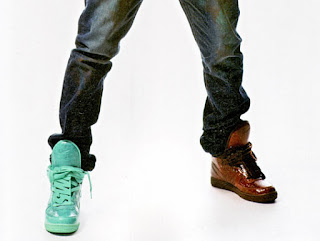 The young brother had a game plan that he laid out for me to consider. It had possibilities but I had my reservations. He was persistent, stepping up his presentation and I had to admit that I liked what he had to say.

We negotiated back and forth until we came to a mutual understanding of each other's expectations. When all was said and done I couldn't help but wonder what I may have gotten myself into. With his confidence and cocky 15-year old swagger I don't think he has many concerns at all.

The boy has a penchent for expensive shoes, an eye for pretty girls, and a sense of humor that may very well make him a superstar one day.

He asked for space, and my audience, and I'm going to give it to him. I agreed because I find his talent refreshing. The young man can write and he doesn't even know it yet. He's got a big voice, with much to say and I respect that he wants to be heard. I think he could do this in his own blog space and I said so. He responded that he needed time to grow, so baby steps would serve him well. I could respect that as well. So my blog will be his training wheels. I imagine he'll soon ride off into the sunset with me trying to see past the dust he's kicked up.

I've given him one day each month that's his day. He's a third generation son carrying the same family name as his father and his grandfather. Westley Woody the Third. And he'll be here, in full swagger, every third day of the month.

THIRD on the 3rd...Don't Miss It!
Posted by Deborah Mello at 2:26 PM
Email ThisBlogThis!Share to TwitterShare to FacebookShare to Pinterest
Labels: Third on the 3rd