STUPID FOR SOME STUFF 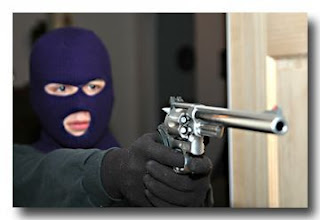 Crime happens to other people. It isn’t supposed to touch those we know and love, and definitely not ourselves. When it does, you suddenly realize that none of us is immune and any of us can be a victim. Just hours ago my seventy-year old father was shot in a home invasion. He doesn’t live in a neighborhood that these things happen in. Some of the folks on his block still don’t even bother to lock their doors. But thieves entered the premises of his very affluent abode in the wee hours of the morning intent on stealing him blind. As the young criminal was attempting to lug away his loot, he didn’t expect to encounter the very large, very angry, black man that he did.

And my father was angry. He was a man who’d worked hard his entire life to acquire the material possessions that he has. And through all of it, while waiting for a response to the 9-1-1 call my mother had made, all he could see was some career criminal was hauling away his stuff. Then anger made him turn stupid over some stuff. Mind you my father suffered a massive stroke just a few years ago and a series of minor strokes shortly after. He walked away with his life, but with full paralysis of his left arm and partial paralysis of his leg. Anger made him forget his physical limitations and stupidity put him directly into the line of gun fire.

The young thief wasn’t prepared for the man he encountered. I imagine my father slamming full force into him threw him for a real loop. But daddy was determined that no thug was going to take his stuff without him putting up one hell of a fight.
By the good grace of God, my father only suffered a minor flesh wound to the leg. Losing his balance, Daddy fell to the ground, pulling the assailant down with him just as the goon pulled his gun and fired. Daddy walked away from this having only lost a few power tools and a nick of flesh. His attacker got away with a few battle scars of his own to show for his crime.

I’m thankful that tomorrow my father can go to Home Depot to replace the stuff that was stolen instead of my mother and I at the funeral home buying a casket to replace a stolen life instead.
Posted by Deborah Mello at 12:35 PM
Email ThisBlogThis!Share to TwitterShare to FacebookShare to Pinterest
Labels: We Are Family