SO HARD AND SO COMPLETELY... 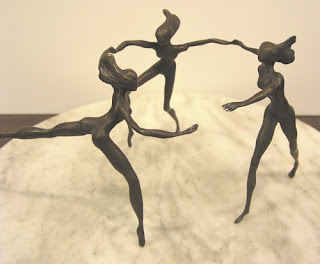 Tara says that it is a blessing. She truly believes that if her parents had never taught them any other lesson, then she and her sisters should be grateful that they taught them about love. Donna, the oldest, doesn’t necessarily agree. The two of them and Angie, the middle child, sat cuddled in the room they’d grown up in. Together they were walking down memory lane, reflecting back on the cards that life had dealt to them. They’d laughed at the life lessons a loving mother and father had taught them, the lessons they were living as adults. It was Tara the youngest who first voiced her opinion and once said, neither Angie or Donna could deny the truth of the statement.

“Love hard and love completely,” she’d said, “or don’t bother to love at all.”

That’s when Angie broke down and cried. Donna didn’t have any more tears to cry with. Both women had learned that lesson well and had lived it daily. What their mother and father had never bothered to teach them was how to handle the hurt that inevitably went hand in hand with loving someone so hard and so completely.

Angie was just coming out of a bad relationship. The man she’d nicknamed The Chef had gone home and home wasn’t her house. She pretends to be okay with his decision but you can see the hurt in her eyes. She’s angry with herself for believing, for giving in to the hope and possibilities that had been promised to her. She had wanted to believe that The Chef had loved her so much that he would have been willing to sacrifice everything for her. She’d seen him leaving his wife as him leaving his wife for her and it simply had not been true. He left because he needed to leave. His leaving was about him. His going back was about him as well. Angie had only been a temporary distraction. If she had not been involved with him he still would have left his wife and he still would have gone back. It just happened that Angie had been there loving him when he did what he need to do for him.

Donna’s romantic pursuits haven’t gone much better. Donna has always chosen the wrong men at the right time, or worse, the right men at the wrong time. Both women have since discovered that they may never be loved as hard or as completely as they are so willing to give love. Even when the good men they cherish are loving them back as best they can. It would seem that Tara has always known this which is why she refuses to love at all, protecting her heart at all costs. If by some chance she hasn’t learned that lesson yet, then her true blessing will be if she never does.

Both Angie and Donna readily dive into love head first, it becoming a total commitment of themselves and all that is most precious about them. Both are always too willing to sacrifice everything but neither has found a relationship where the partner they love so wholeheartedly gives them that in return.

There is nothing wrong with them loving as deeply as they do. Both women are deserving of finding such a love in return. Perhaps Tara is right and their ability to love so intensely is a blessing of sorts. Now if they could only learn to love themselves as hard and as completely.
Posted by Deborah Mello at 8:01 PM
Email ThisBlogThis!Share to TwitterShare to FacebookShare to Pinterest
Labels: Love Stories