SO, WHERE'S YOUR DRAGON HIDING?

Mr. Ben stopped by for a visit. He’s been under the weather lately and was very apologetic about having stayed away for so long. He was excited to share that the problem he was having with his “Johnson” (see Strictly Dickly – 9/16/2006) has been somewhat resolved. I didn’t ask how and thankfully he didn’t feel a need to tell me. He did however want to share his experience with his new lady friend’s daughter.

The lady friend (who’s moving much to fast for his liking) has three children, a “hellion" of a daughter and two “lazy ass” sons. Recently, the daughter had invited the two of them to her home to have dinner with her and her husband. Now bear in mind the daughter is probably in her mid to late forties. They had a very nice evening and after dinner the husband wanted to show Mr. Ben his gun collection. As men do, the two headed for the gun room to talk man talk, leaving the two women to their own devices.

Some time later the women come to check on the two of them. The lady friend is in a mood because she and the daughter had gotten into a tiff over a new tattoo the daughter had gotten. Mom doesn’t approve of tattoos. Of course, the husband came to his wife’s defense, noting that it was just “a little dragon on her hip”. Mr. Ben asked the lady friend if she had seen it and she replied, “no, she wasn’t interested in seeing no mess like that.” The husband again defends the tattoo and then says that Mr. Ben should just take a look and judge for himself. The lady friend says he can look all he wants but she wasn’t having any part of it and she and the husband leave the room to go get coffee and dessert.

Now, Mr. Ben is thinking the daughter is just going to lower the waistband of her slacks just a fraction for him to see, but no, my girl drops pants and panties to the floor. Mr. Ben damn near had a heart attack! According to Mr. Ben, “that girl had a cootchie that was as bald as a baby’s butt”. Mr. Ben couldn’t begin to imagine what had happened to all her “fur”. Of course, the minute he gets past seeing her waxed and polished he has to deal with the tattoo. The “small dragon on her hip” wasn’t quite so small. The tail of the dragon starts at the edge of her pubis and extends up and around her body, wrapping around her waist. The head ends dead center of her pubis with the tongue extended down toward never-never land. Mr. Ben said it got “right hot up ‘dere in ‘dat room”. The daughter gave him carte blanche to “look at it close up if he wanted”, but Mr. Ben made a quick exit instead.

Mr. Ben didn’t go into details about the experience with the lady friend while they were still in the daughter’s home because he didn’t want to stir up any trouble. But later, after the duo had returned to his home, he told the woman exactly what had happened with her daughter. Needless to say, the lady friend is mad as hell: at the daughter and at Mr. Ben. Seems Mr. Ben shouldn’t have wanted to look in the first place.

Mr. Ben thinks he’s going to have to let the lady friend go. She and her “crazy kinfolk” are just a bit much for him to handle. Besides, there’s a nice lady he recently met at a church social. She’s been married and widowed and has no children and as Mr. Ben concurred, “he’s sure she’s still got most of her fur”.

Now, although I found the tale extremely funny, I could just imagine Mr. Ben’s predicament. And while thinking about posting I searched the web for pictures of dragon tattoos figuring that I’d find an interesting image to attach to my post. Lo, and behold, did I find interesting! I just laughed so hard I almost wet my pants! Can you imagine this guy wining and dining a girl and getting her back to his place for some late night delight? Can you just envision her reaction if she doesn’t have a clue? There are no words. As soon as I can pick myself up off the floor I’m going to call and check on Mr. Ben and let him know what he saw wasn’t anything compared to what I’ve just seen. 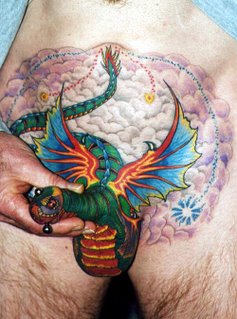 Okay, I had to take a quick look at this tattoo, if this old man gets this tattoo done, he will be in some serious pain. Oh, my God. Talk about getting a feel (lol) okay, let me behave myself.