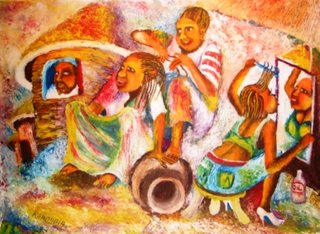 I survived a new stylist and although I left the salon looking like I had a poodle on top of my head, I couldn’t complain. I had been thoroughly entertained. And of course, I proceed with the usual disclaimer: All names have been changed to protect the guilty.

Sandra, a very young twenty-something with two kids still in diapers, has been dating Tom, Dick, and Harry. And it would seem that Tom, Dick, and Harry have now fathered Sandra’s soon-to-be-born third child. Tom, Dick, and Harry are thrilled, each of them joyously contributing to the new baby’s needs. Tom purchased the stroller. Dick bought an assortment of nursery supplies, and good old Harry shelled out the bucks for a brand new SUV outfitted with three baby seats. Sandra was hardly fazed by the fact that she has now fabricated a bold face lie for these seemingly loving and responsible fathers-to-be. Her dilemma was how to keep Bob, the real baby daddy (she thinks) from ever finding out ‘cause Bob ain’t got no job, lives with his mama, and apparently is really lacking below the waist. Juggling the men in her life has apparently become a full-time job for the girl and from what she shared she’s being paid quite well. As Sandra regaled us with tale after tale, she said to me very seriously. “You should write a book about my life, Ms. Mello!” And all I could think was I’ll wait until Maury Povich runs all the DNA tests ‘cause I imagine she’s going to have a few “you are not the father” moments.

Sandra lasted through my relaxer. Eve came in while I was being washed and conditioned and picked up where the conversation left off.

Adam is the type of man a woman could easily fall in love with. He says and does all the right things and Eve is totally captivated by his charms. Unfortunately, Adam has a wife. But Eve was convinced that she and Adam were destined to be more than just employer and employee. She’s so convinced that she decided to go out a on limb and let Adam know how she feels. She envisioned him pronouncing his love and devotion once learning of hers. A passionate first kiss would follow and the rest would be a love story for the history books. Eve set the stage for an after-hours tete-a-tete where they could spill their souls to each other. Little did Adam know a few overtime hours to take a surprise inventory would net Eve a very big surprise.

Once the doors were locked and the two were alone, Eve laid her cards, her breasts, and her crotch on the table, hoping that Adam would want to partake of it all. But Adam put the brakes on real quick. Seems he had to be totally forthcoming and honest with Eve since she didn’t truly know all there was to know about him. But what didn’t she know? Eve was sure they’d shared absolutely everything about each other. Then Adam dropped his bomb.

It seems Adam use to be Amanda. Adam was sexually reconstructed back in 1992. Adam’s wife Lisa use to be Louis. Louis had traded in his boy parts for girl parts right after meeting Adam. And both were completely and totally committed to the relationship and each other. And Eve? She was totally pissed ‘cause Adam hadn’t been the least bit interested in her breasts or her crotch.

Want to hear other folk’s crazy stories? Just tell them your a writer, looking for a storyline, and ask them to share.

Image Credit: At The Hair Salon by Andrew Kamondia