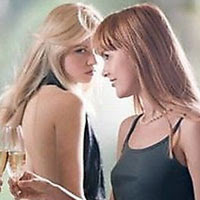 I observed an ex-wife and a current girlfriend meeting each other for the first time. The moment was amusing because although everyone was going through the motions of being mature and adult-like about the whole encounter, it didn’t take a rocket scientist to figure out that what was being said between them was whole-heartedly different than what they wanted to say to each other.

The man in the middle, surprised by the unannounced arrival of his past, was clearly wishing for a hole to fall down into, his anxiety evident by him not introducing anyone in the room. And then the ex–wife figured out who the current woman was and all the fun began (with my very loose translations of the encounter, of course).

Ex-wife: “Oh, this is Dara? This is the girl that spends the night at your house sometimes? (So, this is your new slut?)

The new girlfriend smiled smugly but said nothing at all. But you could see her thinking to herself: (Beyotch, you know damn well who I am and I’m neither a girl nor am I a sometimes houseguest).

Ex-wife: “Is this the one? (And much louder for emphasis.) “Is this the girl who spends the night at your house sometimes?” (I mean, really, is this the cheap tramp you think can replace me?)

Girlfriend, still smiling smugly, eyebrows now raised at boyfriend, and still not saying anything. (Her?! Oh, any other time you introduce me as your friend, and by my name. Now your ex is here and you don’t have anything to say!)

Ex-wife: “Oh, well nice to meet you. Now I can put a face to the name. (I’m gonna remember you, trick! You can bet on that!)

Now, the encounter passed quite quickly with the ex-wife asking boyfriend if she could have a brief conversation with him and the two of them stepping outside out of earshot. When boyfriend returned he had nothing to say and his girl didn't press the issue. She respected the “please, please, please” in his eyes. I can only imagine that he heard something whole-heartedly different once they were closeted behind the privacy of their bedroom door, and then again, maybe he didn’t.

What was interesting is the body language that spoke volumes. The ex-wife wanted control. She also wanted to devalue the relationship the couple had between them. If her ex-guy’s new friend was only a girl and only a sometimes, then maybe…just maybe. But clearly, she didn’t have a clue about the dynamics of their coupling, not privy to the private moments between them.

And the girlfriend wasn’t moved one way or the other, because she did know. She knew the woman who wanted control truly had none. She also saw firsthand that the ex-wife was neither a threat nor a challenge. She saw what we all saw. The ex-wife was clearly no competition at all.
Posted by Deborah Mello at 9:26 PM
Email ThisBlogThis!Share to TwitterShare to FacebookShare to Pinterest
Labels: Love Stories