OH, IS IT WICKED! 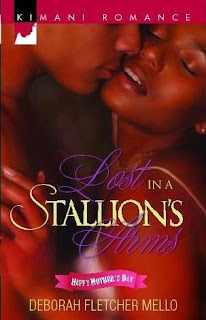 So, I am officially counting down the release of my next book, LOST IN A STALLION’S ARMS. I am so excited that I’m about to bust! Baby brother, Luke Stallion’s story, will officially be released in five weeks, and oh, is it wicked!

Luke Stallion makes me hot! The boy is twenty-something young and as perfect a male specimen as one can imagine. The heroine, Joanne Lake, is full-figured with great attitude. I call her my poster child for women who aren’t a size sixteen small but love every dip and curve of their voluptuous bodies. Together the couple makes for some serious heat and steam. I still break out into a sweat when I think about the seductive encounters I get them tangled up in.

In case you have some doubts, here’s a little taste of what’s to come. If you haven’t pre-ordered your copy, please do. I promise you won’t be disappointed!

Joanne paused for a brief moment. “What’s your definition of foreplay?”

The man’s eyes widened in surprise. He suddenly laughed, mirth rising out of his midsection and flooding his entire body. He laughed hard, the wealth of it moving him to tears. He pressed the cloth napkin in his lap to the corner of his eyes dabbing at the moisture that had clouded his vision. “That was a good one!”

Joanne laughed with him. “I know. So answer the question.”

Luke nodded. “Wow! My definition of foreplay,” he repeated, enthralled by the energy that spun from her eyes. Pausing, Joanne could see his mind racing for an answer.

“Why don’t I just show you,” he said finally, lifting himself from his seat and extending his hand in her direction.

The woman was clearly curious as Luke entwined his fingers between hers and pulled her to her feet. She couldn’t help but follow behind him as he led her back to the front of the nightclub and the dance floor that was jam packed with couples shimming hot against each other.

The music had a rich Caribbean flavor, calypso beats with a hard bass line. One couldn’t help but be moved by the pulsating tones. Pushing his way to the center of the crowd and an expanse of empty floor space, Luke turned to face her, his shoulders starting to bounce in time with the music. He raised his arms to chest level, his large hands clasped into tight fists, his torso shimming from side to side. Taking a step toward her, his pelvis gyrated seductively, the man’s hips swaying for attention. His eyes were locked on hers and Joanne could feel herself falling fast into the stare he was giving her.

Joanne began to gyrate her own hips. She danced slowly at first, her body moving instinctively with his. Moving with him was intoxicating. Heat was rising quickly between them and Joanne suddenly wanted to strip right out of her clothes in exchange for a rush of cool air. When Luke took another step closer, his pelvis meeting hers as his hands fell to her waist, pulling her to him, Joanne thought she could easily pass out from the sudden rush of emotion that flooded through her.

The man was moving in sync against her, his gyrations tight and precise. Joanne couldn’t remember when her arms had swept up and around his neck until she became aware of her fingers lightly caressing the nape of his neck. Their bodies were pressed so tightly together it was if they were one unit instead of two. Then Luke pulled some fancy footwork on her, spinning her around so that her back was against his chest as he pushed himself against her buttocks. Unable to resist Joanne gyrated with him, savoring the sensation of his rock hard frame kissing the cushion of her soft curves. She raised her arms over her head, her fingers snapping in time to the music and then dancing against him like a stripper on a mission she lowered herself to floor level and slithered back again, her body never losing contact with his.

The man slipped his arms back around her waist, spinning her around to face him. The look in his eyes was pure, unadulterated lust, his hunger setting every nerve ending in her body on fire. Both of them felt like they were going to combust, heat radiating from every open pore. As Luke continued to move against her, his left arm holding her tightly around the waist, his right hand moved up the length of her back, his palm coming to rest against the back of her head. Then without warning, Luke slipped his fingers into the short length of her hair, his palm cupping the nape of her neck. He tugged gently as he dipped her over her arm.

The gesture took her by surprise causing Joanne to gasp loudly and then he leaned down over her, pressing his mouth against the curve of her neck. The sensation of his lips against her bare skin was electrifying, overwhelming her senses and Joanne moaned loudly, forgetting that they were surrounded by a crowd of people. Desire raged rampant between them. The sensations were intense and unyielding.

Luke planted a soft trail of kisses up the length of her neck toward her chin. Joanne tried to murmur an objection, nothing but a low hum bubbling past her lips. Her eyes locked with his and before she could draw her next breath, Luke slowly caressed her mouth with his own, grazing her lips once, and then again, the soft touch teasing.

Joanne pressed her palms to his chest. Her clarity was suddenly skewed, desire sweeping every coherent thought from her. She could barely remember her own name as he lifted her back up. Luke smiled, moving to wrap both arms around her as he pressed his cheek to hers.

He whispered into her ear, his breath blowing hot against her flesh. “I’d say that was just my intro to foreplay. To give you a full definition, I would need a whole weekend alone with you.”

Joanne struggled to breathe, words caught tight in her chest as she tried to ignore the hands that glided like hot coals against her skin. The music had transitioned to a slow and seductive tune. Without missing a beat the two had slowed their roll, their gyrations measured as they continued to move one against the other. A slow smile pulled at her lips as she lifted her eyes back to his.

“I think I get the picture,” she said softly, stammering ever so slightly.

Luke smiled back, his expression smug. “Are you sure? Because I don’t mind painting a complete portrait for you. I don’t mind at all!”

Pushing herself away from him, Joanne glanced quickly around the room. “I’m sure,” she said, her gaze returning to his. “But I’ll have to pass.”

Luke eyed her curiously. “Why?”

“Because we’re friends. And I don’t engage in foreplay with my friends.”
Posted by Deborah Mello at 12:33 AM
Email ThisBlogThis!Share to TwitterShare to FacebookShare to Pinterest
Labels: Writers Corner

Hi Deborah,
Read it and it is wonderful..Love Love me some Luke. His brand of foreplay.........boy oh boy. Joanne was a happy lady when all said and done.
I sent you an email and I can't wait for Matthew story those brothers are something else...

Thanks, Louise! Can't tell you how much it means to me.