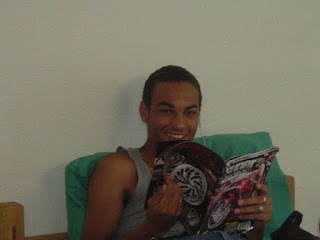 Exactly twenty-one years ago today I was staring out of my front window as falling snow blanketed a moon lit street. I find myself doing the exact same thing tonight, an unexpected snow storm coating the landscape with white, fluffy stuff.

Twenty-one years ago I was also in labor with my baby boy, angry as spit because my baby daddy didn’t think there was any reason for us to rush to the hospital. After much haranguing and threatening to call 911 for an ambulance, the man finally crawled out of bed. It took another hour for him to shower and shave before we finally left the house, traversing some very hazardous roads to get to the hospital.

To my chagrin, when we finally arrived, I was already dilated nine centimeters and told I was too far along for any pain medication. The names I called the ex-husband were drowned out by the sound of a late night game show playing on the hospital room television set and the noise of the doctor and the ex playing along, both annoyed to be awake at that hour of the morning.

Less than an hour after arriving, at exactly 4:41 am that Friday morning, I delivered the most beautiful baby in the world. He pushed his way into the world quickly, never shedding one tear, eyes wide with wonder. Seconds later he was nursing at my breast, claiming every square inch of my heart. The baby boy and I had an in incredible bond from that moment on.

For years we were inseparable, one never being seen without the other. The family made jokes about the side kick attached to my hip. Two years ago I sent him off to college, determined that he would make his way in this big, wide world. I was ready for him to move forward. He wasn’t, coming back to do it in his own way and in his own time. He came back, but not to my home, him insisting and me adament that he would not be dependent on his mommy to get him through.

My son had grown into an amazing young man. He has the most embracing spirit, a clever sense of humor and is too smart for his own good. From day one he has challenged me like no other. We don’t always agree but I have come to trust that I raised him right and he will do much good in this world. He shared his life plan with me recently and I was taken aback by a decision he has made for himself. His choice was wise beyond his years.

I couldn’t be more proud of my child. He is the best of everything his father and I had between us. He’s my baby and today he celebrates his twenty-first birthday.

Happy Birthday, Son-shine! I love you very much!
Posted by Deborah Mello at 1:06 AM
Email ThisBlogThis!Share to TwitterShare to FacebookShare to Pinterest
Labels: We Are Family