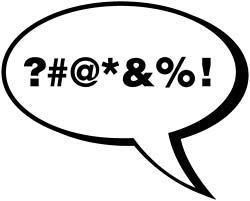 A kid cussed me today. It wasn’t my kid ‘cause I would have snatched a very large knot in her very narrow behind had it been. I still may when I see her next. This child was perturbed because I refused to give her information that she didn’t need to have. I was extremely polite, explaining that I wasn’t at liberty to share the info she was so desperate for. I also referred her to the individual who had the answers she wanted and who would better be able to assist her. Unhappy, this young snot felt it necessary to end the conversation with a rousing, “F@&K, You, B#TCH!” just before slamming the telephone down in my ear.

I don’t handle moments like those well. In fact, to say that I am still pissed off about it is putting it mildly. It didn't help that the person I referred her to totally disregarded her bad behavior.

Other people don’t seem to understand why I’m bothered. But I have issues with such blatant disrespect, especially from youngsters who are still sucking on their mama’s tits with daddy paying their bills. Kids who don’t think anything of talking back and showing total disregard for adults irk me. A friend says it’s my age showing.

I don’t know if it’s so much my age showing or just my refusal to be accepting of bad behavior. I watched the daughter of a family friend cuss her father, telling the man to say out of her business with some very colorful expletives. I witnessed her father turn a blind eye, accepting her rudeness as if there were nothing wrong with it. I’m inclined to think that had he snatched her tail the first time she did it, he wouldn’t have had to worry about her ever doing it again.

Umpteen years ago I would have had a knot snatched in my tail but good had I even thought about cussing either of my parents that way. I still remember my mother popping me in my mouth the first time I swore, repeating a word I’d heard my daddy say. I was barely four years old and you can bet I didn't make that mistake ever again. You just didn’t do things like that and for the life of me I cannot understand how or why we have gotten to a place where bad behavior, particularly from children, is as acceptable as breathing.
Posted by Deborah Mello at 11:45 PM
Email ThisBlogThis!Share to TwitterShare to FacebookShare to Pinterest
Labels: Me Myself And I