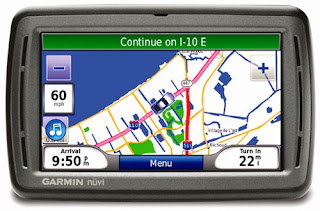 Okay, so my very special friend got a new toy at Best Buy’s Black Friday sale. The man walked away with three GPS systems and has been testing them out all weekend. Yesterday, he’d determined which one had the features that most suited his needs and he sent the others back to the store. I was about ready for him to return every one of them.

The man has been like a five-year old with a Christmas truck. His face lights up every time he discovers the something new his thing can do. I’ve been shaking my head, ignoring his excited outbursts after Monday’s midnight ride to the mall to see which one rerouted us and which one didn’t.

Tonight, as we said goodnight, preparing to go to sleep, he tapped his toy and plugged in some new setting. It was too much to ignore so I had to ask.

“Please, tell me where you need directions to in your sleep?”

As his thing chirped and flashed, he grinned, setting it gently on the nightstand. Then with a smug chuckle, he said, “Destination Deborah!”

So maybe his toy's not so bad after all.
Posted by Deborah Mello at 2:38 AM
Email ThisBlogThis!Share to TwitterShare to FacebookShare to Pinterest
Labels: Me Myself And I